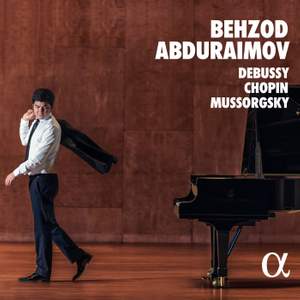 Each ‘picture’ in the gallery unfolds its own enticing universe, vividly elucidated by the most genial and compelling of tour guides...Abduraimov’s visionary interpretation is on a par with the... — Gramophone Magazine, January 2021 More…

No.5 in D Major – Allegro Molto

No.7 in A Major – Andantino

No.16 in B Flat Minor – Presto Con Fuoco

No.17 in A Flat Major – Allegretto

No.24 in D Minor – Allegro Appassionato

5. Ballet of the Unhatched Chicks

Behzod Abduraimov joins Alpha for several recordings, starting with this ‘kaleidoscope of miniatures’ – miniatures that are in fact fairly gigantic, and showcase the Uzbek pianist’s extreme virtuosity and sensitivity. ‘Each movement is in itself a miniature, and taken together they form a kaleidoscope of human emotions and images of all kinds’, says Behzod Abduraimov. In his view, the pieces in Debussy’s Children’s Corner are not intended for young piano students, but ‘for adults, so that they can immerse themselves in the world of children with a little nostalgia and a lot of humour’. When it comes to Chopin, ‘each prelude has a different musical essence, creates its own atmosphere. Together they form an arc spanning the distance from the first prelude to the last. So I tried to consider them as a whole’. Finally, Mussorgsky evokes in ten highly expressive movements the paintings at an exhibition held in posthumous tribute to his friend Viktor Hartmann. A ‘Promenade’ heard several times suggests Mussorgsky himself strolling through the exhibition. For Behzod Abduraimov, ‘the “Promenades” play a key role in this cycle: they create the atmosphere before each painting’.

Born in 1990, a protégé of Valery Gergiev under whose direction he has already recorded with the Amsterdam Concertgebouw Orchestra and (during the 2016 BBC Proms) the Munich Philharmonic, Behzod Abduraimov is one of the most promising pianists of his generation.

Each ‘picture’ in the gallery unfolds its own enticing universe, vividly elucidated by the most genial and compelling of tour guides...Abduraimov’s visionary interpretation is on a par with the very finest. His secret ingredient is an acute awareness of orchestral colours (not necessarily from Ravel) and an ability constantly to vary timbre and texture without damaging the natural flow...All in all, a serious candidate for a benchmark recording, capping a most distinguished recital.

Abduraimov’s programme seems designed to display the Tashkent-born pianist’s versatility. Ringing, generously pedalled sounds, rich in harmonics, and a fleetness and precision of execution characterise his account of Mussorgsky’s Pictures at an Exhibition.