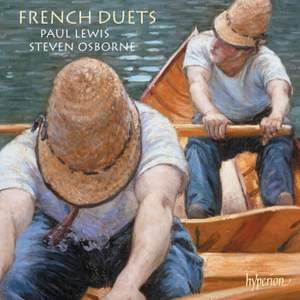 Fresh-faced charm pervades this astutely curated disc…Far from a marriage of convenience, Lewis and Osborne are long-standing duo partners, complementing each other perfectly in lightly-worn... — BBC Music Magazine, April 2021, 5 out of 5 stars (Performance) / 4 out of 5 stars (Recording) More…

Recording of the Week, French Piano Duets from Paul Lewis and Steven Osborne

In a true meeting of musical minds, the two superb pianists team up once again for a delectable programme of miniatures by Fauré, Poulenc, Stravinsky, Debussy and Ravel.

A bewitching programme of music often associated with childhood, including favourites by Fauré, Ravel and Debussy; works which amply reward the care lavished on them by Paul Lewis and Steven Osborne in these exquisite accounts.

Fresh-faced charm pervades this astutely curated disc…Far from a marriage of convenience, Lewis and Osborne are long-standing duo partners, complementing each other perfectly in lightly-worn virtuosity… In short, this is pure enjoyment from start to finish.

This offers not only the perfect escape from our current locked-down state but also the most sublime example of peerless pianism.

Such is the synergy between them that for most of this recital I entirely forgot that I was listening to two pianists rather than one: every shift in colour, dynamic and tempo is perfectly synchronised, and the balance throughout is similarly immaculate, with neither succumbing to the temptation to over-assert themselves when playing the supporting role.

The cover image of French Duets gives away one secret of the music the pianists Paul Lewis and Steven Osborne perform – or, rather, the way they play it: in Boaters Rowing on the Yerres by Caillebotte, two mighty rowers hold one oar each, pulling with equal weight.