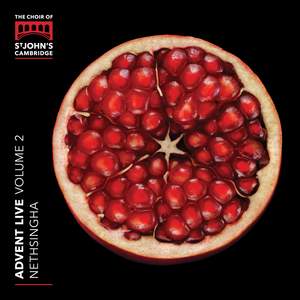 The fantastic balance of anthems, hymns and organ music leaps out in this arresting, fabulously performed Advent programme from St John’s, Cambridge. — BBC Music Magazine, Christmas 2020, 4 out of 5 stars

Dove: I am the day

McDowall, C: A Prayer to St. John the Baptist

Milner, Anthony: Out of your sleep

Maconchy: There is no rose

The sublime Choir of St. John’s College, Cambridge return with the second volume in their Advent series, celebrating the advent season from within the Christian tradition; a season celebrated since at least the Sixth Century.

This splendid live recording, from within the Chapel of St. John’s College itself, features Christmas favourites including Britten’s Deo Gracias from A Ceremony of Carols, as well as gorgeous performances of lesser known works by modern composers including Jonathan Dove, Arvo Pärt and Paul Manz.

The fantastic balance of anthems, hymns and organ music leaps out in this arresting, fabulously performed Advent programme from St John’s, Cambridge.