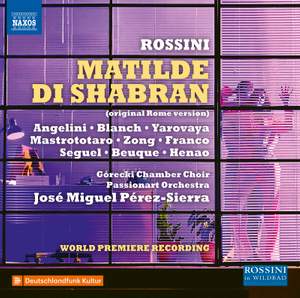 Angelini is magnificent as the villain, everything that you hope for in a Rossini tenor – fleet of voice in his runs and trills and with gravity-defying head notes. Sara Blanch’s Matilde matches... — BBC Music Magazine, February 2021, 4 out of 5 stars More…

The comic-heroic romp Matilde di Shabran was Rossini’s last commission for the theatres of Rome, the city where he’d had great successes such as Il barbiere di Siviglia. Rossini took advantage of the agile, sparkling style of librettist Jacopo Ferretti to create a narrative in which the ferocious Corradino, a declared misogynist, is introduced to the resourceful Matilde, who succeeds in melting his iron heart and winning his love. This premiere recording revives the original 1821 Rome version, which was conducted at the last minute by Paganini, and caused brawling in the streets between Rossini’s admirers and detractors.

Angelini is magnificent as the villain, everything that you hope for in a Rossini tenor – fleet of voice in his runs and trills and with gravity-defying head notes. Sara Blanch’s Matilde matches him note for note...Equally pleasing is the Passionart Orchestra conducted by José Miguel Pérez-Sierra. All scrupulously Rossinian including the celebrated horn solo at the beginning of Act II.

The three main soloists, Corradino, Matilde, and Edoardo, fully deserve their accolades for their singing and endurance! Naxos offer very well-balanced sound, with the applause kept after the set pieces and at the end of each act. The notes are good. For all bel-cantoists and Rossini fans out there, this is a must.

Angelini is pretty good, hampered only by the failure of the DeutschlandRadio Kultur recording to keep the stage performers consistently on mike...The Catalan-born soprano Sara Blanch is an excellent Matilde, with the French mezzo-soprano Lamia Beuque giving stellar support as Countess d’Arco...José Miguel Pérez-Sierra is at his best [in the ensembles], galvanising into action his admirable chorus and not-so-admirable orchestra.

As the ridiculously over-aggressive Corradino, Michele Angelini’s fluent tenor moves confidently around all the fast notes as well as into the higher register with both musical and dramatic insight…Blanch's sparkling soprano makes her an effective Matilde…Pérez-Sierra sees to it that the comic-grotesque spirit of the piece registers.