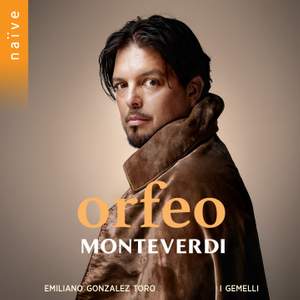 Monteverdi’s L’Orfeo - premiered in 1607 at the Ducal Palace in Mantua - is a unique masterpiece in its way of thinking and representing music that never ceases to inspire the greatest.

Emiliano Gonzalez Toro, at the heart of his ensemble I Gemelli, signs his third recording for naïve with this luxuriant reading refocused around the voice, which exalts both the aesthetics inherited from the Renaissance and the modernity of a virtuoso score.

This production, hailed on the stages of Paris and Toulouse at the end of 2019, has the singularity of being conducted ‘by the voice’ by the tenor, who plays the title role while directing singers and instrumentalists. Emiliano Gonzalez Toro displays his care - not only for himself but also for the ten soloists who surround him - with richly ornamented vocal lines that contrast in their dynamics and climates, always keeping the narration and interventions of the characters in tension.

From this fragmentation inherent in Striggio’s poem, which is also a model of proportions and balance for this favola in musica, the performers gathered here draw mobility and creativity, thanks to which recurrence is never repetitive and the pastoral scenes enhance moments of introspection such as “Rosa del cielo” (Act I), the famous “Tu se’ morta” (Act II) or the arrival of Orpheus in the Underworld in Act III (“Scorto da te”).

A continuo that is very inventive in its choice of timbres and accompaniment enriches the vocal and instrumental texture, dominated by the viols and enriched by a 1600 ceterone from the collections of the Musée de la Musique de Paris. The result is a true festive dimension, a powerful divine breath.

The result is sprightly orchestral playing, textures absolutely dripping with ornamentation and a proclivity for highly varied speeds...Emiliano Toro brings an easy fluencytotheroleofOrfeo,and he presents the central aria ‘Possente Spirto’ with great aplomb…In general the cast is good, with especially outstanding performances from Mathilde Etienne (as Proserpina) and Jêróme Varnier (as Caronte).

Gonzalez has a fine voice and gives ‘Possente spirto’, the geographical and spiritual heart of the work, a reading of great poetic beauty...Both in his own singing and in that of the other soloists, there is a keen collective sympathetic understanding of Monteverdi’s operatic language...This is a dramatic and lively reading given by a well-selected and carefully matched cast guided by a musician of sensitivity and imagination.

Toro describes how this Orfeo project fulfilled a long held ambition. It is one into which he has obviously put a great deal of thought...As a singer he brings to the role not only an intrinsically lovely timbre, but more importantly recognition that in this music it is text that maintains supremacy...All in all, with the exception of the lack of ornamentation, this is a highly rewarding Orfeo, executed with thoughtful understanding and sensitivity.

[Toro's] Orfeo is remarkable for both the fluency of his singing (the coloratura flourishes in Possente Spirto fall like pearls from his larynx) and his eloquent declaiming of Monteverdi’s recitar cantando...The supporting cast is packed with superb specialists: Emöke Barath, Natalie Perez, Jérôme Varnier and Fulvio Bettini, but it’s Toro’s set.