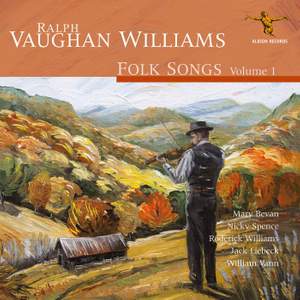 All three soloists are careful to avoid an over-sophisticated response to songs whose strength is their directness of expression and simple integrity. Williams in particular is a perfect singer... — BBC Music Magazine, January 2021, 4 out of 5 stars (Performance) / 5 out of 5 stars (Recording) More…

No. 3, The Thresherman and the Squire

No. 4, The Pretty Ploughboy

No. 6, How Cold the Wind Doth Blow

No. 9, Come, All You Worthy Christians

No. 13, Here’s Adieu to all Judges and Juries

No. 1, Robin Hood and the Pedlar

No. 3, Just as the Tide Was Flowing

This is the first in a series of four albums recording all 80 of the folk songs in English that Ralph Vaughan Williams arranged for voice and piano or violin. 57 of the 80 songs have not previously been recorded in these arrangements, so there is a good deal of unknown - but very beautiful - music to be found here.

This first album has 23 tracks including 15 world premières. It includes Folk Songs from Sussex (1912) and Six English Folk Songs (1935). Later volumes will include songs collected in the Eastern Counties (1908), the Appalachian Mountains (about 1938) and from Newfoundland (1946). Vaughan Williams is well known as a collector of folk songs, but his own collection by no means predominates in this series; most of the arrangements were made and published as a collaborative effort, drawn from many sources.

The 14 songs from Sussex on this album were all collected by Percy Merrick from Henry Hills, a farmer from Lodsworth, Sussex, around 1900. Some will be well-known in other arrangements; others will be unfamiliar.

Praised by Opera for her "dramatic wit and vocal control", British soprano Mary Bevan is internationally renowned in baroque, classical and contemporary repertoire, and appears regularly with leading conductors, orchestras and ensembles around the world.

Opera singer Nicky Spence is one of Scotland's proudest sons and his unique skills as a singing actor and the rare honesty of his musicianship are steadfastly earning him a place at the top of the classical music profession.

Roderick Williams is one of this country's most sought after baritones and is constantly in demand, encompassing a repertoire from the baroque to world premières. In 2016 he won the Royal Philharmonic Society's Singer of the Year award.

A multiple-prize winning and critically acclaimed conductor and accompanist, William Vann is equally at home on the podium or at the piano and is the founder and Artistic Director of the London English Song Festival.

All three soloists are careful to avoid an over-sophisticated response to songs whose strength is their directness of expression and simple integrity. Williams in particular is a perfect singer in this repertoire, with immaculate enunciation and a happy knack of letting the music speak unaffectedly for itself.

The rewards are copious: baritone Roderick Williams is suitably rollicking in ‘Bold General Wolfe’ and ‘Captain Grant’; soprano Mary Bevan ravishes the ear and touches to the marrow in ‘Farewell, lads’; and tenor Nicky Spence displays a personable empathy with the cannily resourceful deeds of ‘Lovely Joan’...an absolute must for all true Vaughan Williams aficionados. What are you waiting for?