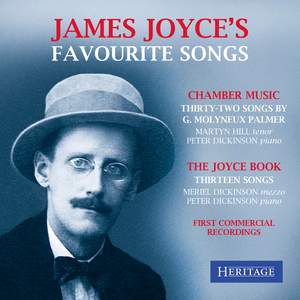 I. Strings in the earth and air

II. The twilight turns from amethyst

III. At that hour

IV. When the shy star

V. Lean out of the window

VI. I would in that sweet bosom be

VII. My love is in a light attire

VIII. Who goes amid the green wood

IX. Winds of May

XII. Go seek her out

XIII. My dove, my beautiful one

XV. O cool is the valley

XVI. Because your voice

XVIII. Be not sad

XIX. In the dark pinewood

XX. He who hath glory lost

XXI. Of that so sweet imprisonment

XXII. This heart that flutters near my heart

XXV. Thou leanest to the shell of night

XXVI. Though I thy Mithridates were

XXVIII. Love came to us

XXIX. O it was out by Donnycarney

XXXI. All day I hear

XXXII. I hear an army

Roussel: A Flower Given to my Daughter

Hughes, H: She weeps over Rahoon

Sessions: On the Beach at Fontana

Goossens: A memory of the players in a mirror at midnight

An enterprising release featuring James Joyce’s poems including G. Molyneux Palmer’s setting of ‘Chamber Music’, performed by Martyn Hill and a performance by Meriel Dickinson of a selection of 13 songs by more familiar composers: Moeran, Bax, Roussel, Herbert Hughes, Ireland, Sessions, Bliss, Howells, Antheil, Edgardo Carducci, Goossens, C. W. Orr, Van Dieren. Both recordings were made for the BBC in 1988 and 1982 respectively and appear here on CD for the very first time. Of particular interest is the cycle by Palmer, a kind of Irish Winterreise that adds significantly to the history of Georgian song. Palmer was a pupil of Stanford who spent the last thirty years of his life in Dublin, latterly as an invalid, where his music, including operas and choral pieces, gained some performances. Letters between Joyce and Palmer show how enthusiastic Joyce was about these songs.