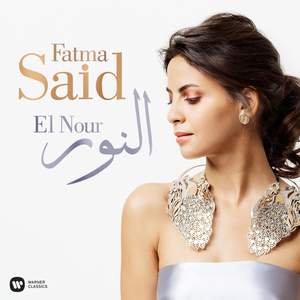 The Egyptian soprano talks to Katherine about her debut solo album on Warner Classics, featuring songs by Egyptian, French and Spanish composers.

The young Egyptian soprano Fatma Said, praised for the luminosity and rich colours of her voice, makes her recording debut for Warner Classics with 'El Nour'. Her enticing and absorbing recital programme crosses cultures, combining art songs by French, Spanish and Egyptian composers with Egyptian folk songs and popular songs from the Middle East. As she explains, 'El Nour' in Arabic means 'Light', and this album sheds light on how music that has been interpreted many times can be perceived in a different light. The idea is to connect three cultures - Arabic, French and Spanish - and to show how much, despite cultural, geographical and historical differences, they have in common when it comes to music'.

Clever arrangements allow us to encounter shared visions across France, Spain and North Africa...There’s no tacky Orientalism here...The breathy, soft-voiced ney (a Middle Eastern flute) brings magic to the sound...The Egyptian songs are clustered at the end. AbdelRahim’s Ana bent el sultan is huge fun, offering an Arabic soundscape with modernist touches...Recitals which combine innovation and appeal at this standard are a rarity. This is one to give all your friends.

Said is an engaging storyteller, though, her French diction sharply animated, with shiny top notes glinting brilliantly...Martineau paints vivid pictures at the piano, too..The popular songs from Egypt and Lebanon that close this imaginative album feature traditional instruments such as the qanun and are a fascinating insight into Said’s musical background. I’ll be fascinated to see where Said goes next.