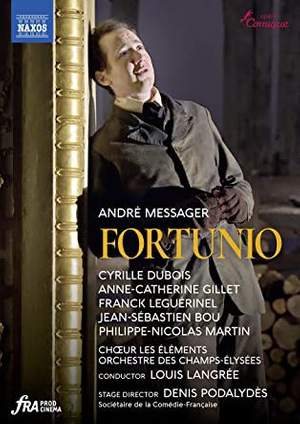 Dubois is wonderful in the titlerole. His tenor, with its slight flutter and exquisite head notes, makes for an appealing performance as the lovelorn youngster…Langrée coaxes lovely, affectionate... — Gramophone Magazine, December 2020 More…

This 2019 Opéra Comique production of Messager’s Fortunio is a celebration of the work’s success when it was premiered by the same company in 1907 and received acclaim that was to last decades. One of the last composers to devote his entire career to opera and operetta, Messager exemplified in his music a feeling for dramatic pacing and the spirit of Belle Époque, qualities that permeate Fortunio, a comédie lyrique in which the dialogue in the libretto is given a continuous musical setting. Taking Alfred de Musset’s play Le Chandelier as his source, Messager explores upper-class society at the turn of the 19th century with subtlety of characterisation and a thoroughly French orchestral transparency.

Dubois is wonderful in the titlerole. His tenor, with its slight flutter and exquisite head notes, makes for an appealing performance as the lovelorn youngster…Langrée coaxes lovely, affectionate playing from the Orchestre des Champs-Élysées, shaping Messager’s melodies with great care. For gentle, escapist charm – and many of us require large doses of that right now – Fortunio would seem to be the perfect remedy.

The score is charmingly easy on the ear, with enough piquancy to avoid foursquare blandness, while Messager’s characterization of its five major roles is sharp but sympathetic..Naxos’s video release does this neglected masterwork good service...Dubois sings the duped mooncalf with true refinement...His is a movingly calibrated performance, matched by Anne-Catherine Gillet’s brew of flirtatious hypocrisy, guilt and frank sexuality as the (anti-?)heroine.