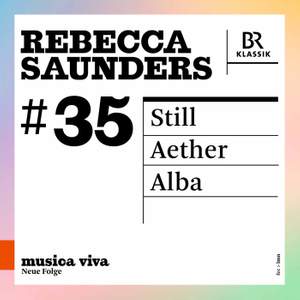 Three visceral, experimental works by the brilliant British composer Rebecca Saunders are performed live, with every instrument pushed to its limit. A real experiment with textures and timbres. — BBC Music Magazine, Christmas 2020, 4 out of 5 stars More…

"The portrait of the British composer Rebecca Saunders, who lives in Germany, begins with her 2011 two-part violin concerto Still written in 2011. It was premiered at the Beethoven Festival in Bonn (with Carolin Widmann as soloist). The chamber music composition Aether for two bass clarinets was composed in 2015/16; and Alba came from a composition commission in 2014 by Bayerischer Rundfunk’s ""musica viva"" and BBC Radio 3 for the BBC Scottish Symphony Orchestra. The CD edition of the “musica viva” concert series of the Bayerischer Rundfunk, which started in 2000, will be continued from autumn 2020 onwards together with BR-KLASSIK. On the occasion of the 75th anniversary of ""musica viva"" - the concert series founded in 1945 by Karl Amadeus Hartmann - two recordings with works by the contemporary composer Rebecca Saunders (*1967) and the composer Enno Poppe (*1969) will come out in October as initial releases. All CDs feature live recordings that were made at “musica viva” concerts with the Bavarian Radio Chorus and the Symphonieorchester des Bayerischen Rundfunks, together with well-known soloists."

Three visceral, experimental works by the brilliant British composer Rebecca Saunders are performed live, with every instrument pushed to its limit. A real experiment with textures and timbres.

All three works show Saunders’ extraordinary command of instrumental detail, which seems to burrow into the very core of every sound, and scrutinise it meticulously.