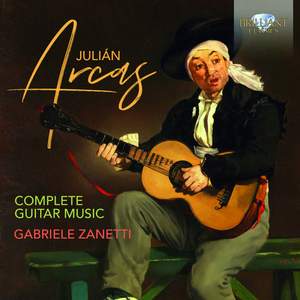 • Julian Arcas (1832-1882) was born in Almeria, Spain in a musical family: his father was guitarist and passed his passion soon over to his son. The family moved to Malaga where Julian took lessons with the famous José Asencio. From his 16th on Julian gave concerts all over Spain, soon becoming one of the leading guitar virtuosos of his time. During a concert tour in England he was hailed as the greatest guitarist in the world.

• Arcas formed lifelong friendships with the famous guitar builder Antonio de Torres (who built his “Leone” guitar for him) and with the young Francisco Tárrega, exchanging guitaristic innovations and techniques. • Arcas’ compositions include studies, virtuoso showpieces, arrangements of operatic themes, and folk-inspired works. His life and career coincided with the start of the Golden Age of Flamenco, and his personal style embraced Spanish folk traditions at a time when populism and nationalism were all the rage.

• Played with total conviction and feeling for the style by Italian master guitarist Gabriele Zanetti.