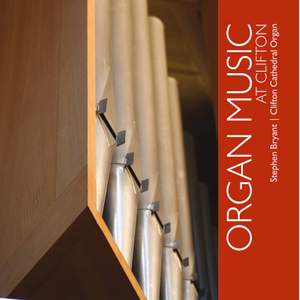 The Cathedral organ is a three-manual pipe organ built by Rieger Orgelbau of Austria for the opening of the Cathedral in June 1973. The specification was drawn up by Joseph von Glatter-Götz, then managing director of Rieger, in conjunction with John Rowntree of the Society of Saint Gregory Organ Advisory Group. It has 1,830 pipes. Stephen Bryant has been Organist of Clifton Cathedral since September 2000, a post he combines with his full-time teaching position. He has undertaken various recordings, broadcasts and tours with the cathedral choir, including broadcasting live on BBC1 as well as various broadcasts on BBC Radio 4. He is in demand as an organist, having already performed throughout the UK, Europe and America. He was a prizewinner at the Oundle International Summer School and a finalist in the Royal College of Organists' Performer of the Year competition in 2002.