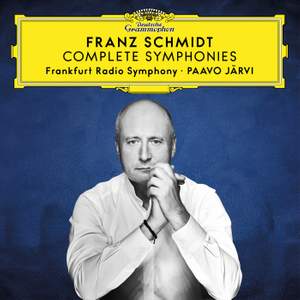 Järvi is an almost ideal interpreter of this composer, not only managing to bring transparency and luminosity to Schmidt’s often thickly textured orchestration, but also keeping a tight rein... — BBC Music Magazine, Christmas 2020, 5 out of 5 stars More…

Schmidt, F: Symphony No. 3 in A major

The Estonian conductor talks to Katherine about falling in love with the music of Franz Schmidt, and how Leonard Bernstein reignited his passion for the Tchaikovsky symphonies.

At a time when many of his contemporaries were exploring more fluid structures, Franz Schmidt while perhaps stretching tonal harmony to its limits, continued to embrace 19th-century form and achieved a highly personal synthesis of the diverse traditions of the Austro-German symphony. His language, rather than being wedded to a narrative of dissolution and tragedy is radiant and belligerently optimistic and reveals this scion of largely Hungarian forebears as the last great exponent of the style hongrois after Schubert, Liszt and Brahms.

His work having fallen from prominence, Paavo Järvi and the Frankfurt Radio Symphony's dazzling live performances of all four of his symphonies, and the famous Notre Dame Intermezzo, shine a new light on this fascinating oeuvre and also on an affable and genial soul, and reminds us of the constant need to reappraise and enrich our account of music during the first half of the 20th century.

Järvi is an almost ideal interpreter of this composer, not only managing to bring transparency and luminosity to Schmidt’s often thickly textured orchestration, but also keeping a tight rein on the structural direction of works that in lesser hands can seem to meander…Best of all is his deeply committed account of the Fourth...it proves to be a gripping musical experience from first bar to last.

At its best this is music of great power and harmonious adventurousness, beautifully crafted and patiently built up. At other times, admittedly, it can seem to lose its way…The achievement of Järvi and his orchestra, though, is in making it all seem necessary and inevitable: these are compelling, supremely persuasive performances that constantly underline the music’s great qualities

By the standards of his peers his works may sound old-fashioned, but his melodic material and gift for orchestration, especially his writing for solo woodwinds, make these works worth exploring, especially in Järvi’s new Frankfurt set...The Frankfurt band — conducted with luminous transparency — bring a more Central European sound to the music than Neeme Järvi’s high-gloss Americans.