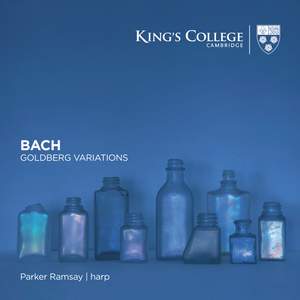 Variation 12. Canone all Quarta in moto contrario (Arr. for Harp)

The harpist talks about his new album, on which he performs his own arrangement of Bach's Goldberg Variations.

King's College presents Bach's iconic Goldberg Variations as arranged and performed by the harpist Parker Ramsay. The latest album from King's College follows critically acclaimed recordings by other alumni, including the cellist Guy Johnston and the organist Richard Gowers. Parker Ramsay's artistry is distinguished by it's breadth and crossing of instrumental boundaries and genres at the harp, organ and harpsichord. He was the first American to hold the post of Organ Scholar at King's, following in a long line of prestigious predecessors, and as a harpist specializes in repertoire for early harps and new music for the modern pedal harp. The album is accompanied by extensive notes by leading Bach scholar Burkhard Schwalbach and Pulitzer Prize winning music critic Tim Page.