Bach's Goldberg Variations have attracted the attention of many an instrumentalist and group over the years – and not just keyboard players. Alongside the original version, incarnations for brass quintet, string trio and many other combinations exist, revealing new sides to Bach's contrapuntal writing.

Harpist and self-described "recovering organist" Parker Ramsay – former Organ Scholar at King's College Cambridge – has produced his own arrangement of the Goldberg Variations for his instrument, drawing on his experience at the organ, harpsichord and piano. I spoke to Parker about how and why this arrangement came into being, and what new nuances the harp brings to this repertoire.

Various arrangements of Bach’s Goldberg Variations exist, but mostly for small ensembles or other keyboard instruments. Where did the idea first come from to transcribe them for the harp?

Well, the fantastic transcriptions by harpists Catrin Finch and Sylvain Blassel have been around on recording for ten years or so. I think they had differing reasons from each other for their transcriptions, which can be heard in their vastly different approaches to the work. I can’t speak on their behalf, but as for my own transcription, it came about as a result of a long time spent with the Goldbergs, first at the piano and then again at the harpsichord. In short, when I was working on them for my harpsichord master’s recital at Oberlin Conservatory, I found myself taking them to the harp over and over again and feeling more comfortable or inspired (which is ironic, as I was at Oberlin to do a historical performance degree!). And a few years later, after I’d left Juilliard and trying to figure out what my first project would be, I ended up returning to the Goldbergs.

The harp of Bach’s time seems to have suffered from similar limitations to the horn – with the impossibility of quick chromatic changes the critical obstacle to its wider adoption. Is there any indication that Bach or his contemporaries showed interest in writing for the harps of their time?

“The harp of Bach’s time” is a tricky concept, as harps differed wildly based on where one lived in Europe. There were some early pedal harps floating around (admittedly with a less complex mechanism than today’s pedal harps) thought not yet in wide circulation. In Leipzig, for instance, we know there was a harpist hanging around sometime around 1720. But apart from that, evidence is scarce as to whether Bach was ever really in close proximity with a harp at all.

But for the most part, yes, harps of Bach’s era had two or three rows of strings in order offer some chromatic capability. In my mind the only figure who really stands out as taking an “interest” in the harp was Handel, who composed a concerto to be played in the middle of Alexander’s Feast, solos in Saul and Esther and an indication for harp to appear on stage in Giulio Cesare. It should be noted that these were all written fairly close to one another, indicating that Handel was likely working with the same harpist, who was likely of Welsh descent and playing a harp very similar to the Welsh triple harp. It should also be noted that in a sense, Handel’s compositions for the harp shouldn’t be surprising, as the harp’s presence in the British Isles has been long, varied and continuous, from the medieval era right up to the present day. Again, proximity to the instrument is a huge factor with composition for the harp!

The technical demands of the harp are different from those of a keyboard instrument, and passages that are quite playable on the latter might be much more challenging, or less idiomatic, on the former; how closely were you able to adhere to the original Variations when making your arrangement?

For the most part, I was able to stay fairly true to the score, although my interpretation in the recording might sound very different than a pianist’s. What makes a work idiomatic at the harp is one which helps to expose all the natural resonance of the instrument, as well as the variety of color between different registers. This is a different game perhaps than on a piano, where something that is idiomatic might be thought of something that is facile. It’s no secret that pianists sit in the shadow of Glenn Gould, and when something isn’t working in the Goldbergs, the go-to solution is play it faster. And yet I didn’t feel pressure to mimic a keyboard performance, as the harp simply isn’t a keyboard instrument. So in certain variations where I felt the instrument and the music were likewise being done a disservice by playing “what’s on the page,” I rearranged them quite a lot.

The legend of the insomniac nobleman, though probably apocryphal, is part of the Variations’ mythos and indeed gives them their popular name; do you think they would be so well-known today if it hadn’t been for that charming piece of accidental PR?

I have to say the apocryphal story is one I know, but has never, ever entered my consciousness when I’ve approached the piece. In reality I think very few people really know that story, but rather know the more pertinent story in the 20th century, which is that a work which was largely seen as obtuse and academic became sensationalized by Glenn Gould.

In the title of your blog you describe yourself as a “recovering” organist – and your initial association with King’s College was through the post of Organ Scholar which you formerly held. So what led you to choose the harp over the organ?

The harp is an instrument I had always played my entire life, as my mother is a harpist and pedagogue. I had been studying privately alongside the organ scholarship at King’s and then again at Oberlin, and more and more often people told me what I kind of knew internally: “you look different when you play the harp,” or “you sit so much more naturally at the instrument” and “why haven’t you considered doing this full time.” The truth is, the harp simply doesn’t have the same stature as an instrument like the organ. There is no “harp scholarship” at King’s College, Cambridge. There are no truly great works such as La Nativité or Bach’s Preludes and Fugues, which musicians can have at the tip of their tongue. The organ – which I still love, as an instrument – was a means of exposure to a vast amount of musical material which I never would have come in contact with if I had sat at the harp bench for my undergraduate years. At King’s, I learned continuo, I regularly accompanied services for a world-famous choir, got to meet important composers, play broadcasts, tour the world, etc. And to top it off, I got to do a bachelor’s at Cambridge University.

Those opportunities are not ones that are normally afforded harpists – or many other instrumentalists - when they are undergraduates. I remember sitting with my harp teacher in London after getting into King’s, and her telling me “the harp will be waiting for you when you come back, but you cannot turn this down.” When I did decide to come back to the harp, I did have a fire lit under me. If I was going to do it, I wanted to all the things that organists, keyboardists, pianists, violinists, composers – literally everyone else gets to do: lead or direct ensembles, play extended/cyclical works, commission new music, and, more importantly, use my instrument as an engine for change, revitalization or philosophizing in the classical music world.

In a recent New York Times article you outline the respective drawbacks of the three main keyboard instruments on which the Variations are generally performed, and propose the harp as a best-of-all-worlds solution. Are there other keyboard works that you’ve found gain from being transcribed for the harp?

Well, the harp is the best-of-all-worlds solution for myself, not everyone else. I’m fully aware that my interpretation may not be everyone’s cup of tea, just as the notion of Bach on the harp might be too outré for some. But the obvious candidate for transcription is Claude Debussy. Again and again, harpists find more and more keyboard works of his that gain a huge amount by being played on an 47-string harmonic soup machine. 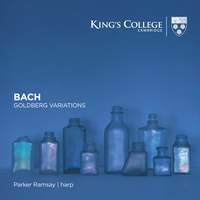