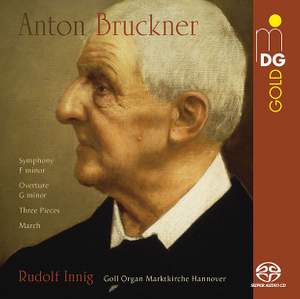 Throughout his life, Anton Bruckner was initially highly regarded as an organist. Rudolf Innig demonstrates with a spectacular listening experiment how much the great symphonic composer was also influenced by "his" instrument. Innig transferred early orchestral works by Bruckner to the organ with loving attention to detail. The result: astounding. And equally good. Rudolf Innig chose the Goll organ in the Marktkirche in Hanover for his Bruckner project. The sound of the large four-manual instrument is perfectly adapted to the needs of the 19th century. Perfectly embedded in the spatial acoustics, the reproduction of the rich sound of this instrument on the SACD - including a 3-D option - is also a listener's pleasure.