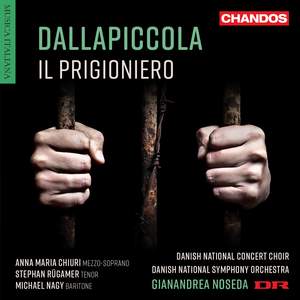 Noseda and his Danish forces offer a thrilling account of this masterpiece, its all-important orchestral detail meticulously realised… as the prisoner, Michael Nagy is alive to every nuance of... — BBC Music Magazine, September 2020, 5 out of 5 stars More…

Gianandrea Noseda continues his series of recordings of the works of Luigi Dallapiccola, this time with his Danish forces. Seen by many as Dallapiccola’s masterpiece, Il prigioniero (The Prisoner) is a one-act opera composed in the late 1940s, and premiered (in a radio broadcast) in 1949. The Italian composer had first encountered serialism as a student in Florence in the 1920s, when Schoenberg visited to conduct Pierrot lunaire. The influence was profound, although it would take two decades before it demonstrated itself fully in his composition. Based primarily on a short story, ‘La Torture par l’espérance’ (Torture by Hope), by the French writer Villiers de L’Isle-Adam, the opera concerns a prisoner of the Spanish Inquisition who finds the door of his cell unlocked and creeps out under the cover of darkness to the garden beyond. Hope rises to the level of ecstasy, before he finds himself embraced in the Garden by the Inquisitor, who returns him to his cell. Dallapiccola employs three twelve-note tone rows in the work, which he named ‘Prayer’, ‘Hope’, and ‘Freedom’, from which all the vocal lines are created. The album is completed by three choral works: Estate, written in 1932 for male chorus, and two settings from 1933 of poems by Michelangelo Buonarroti the Younger for mixed voice chorus.

Noseda and his Danish forces offer a thrilling account of this masterpiece, its all-important orchestral detail meticulously realised… as the prisoner, Michael Nagy is alive to every nuance of the role. Stephan Rügamer caressing voice is ideal for the falsely sympathetic jailer, too…A thrilling disc, splendidly recorded.

Noseda’s performance is nothing if not formidable. Its impact derives largely from his ability to think in terms of cumulative span while focusing on textural clarity and immediacy of expression…The cast, meanwhile, combine lyricism with declamation… It’s an outstanding, essential album, every second of it.

Nagy really gets inside [the Prisoner's] tortured, almost schizophrenic mind as the drama fluctuates between the conflicting emotions of hopes and fears...There’s little doubt, however, that the greatest plaudits have to go to Noseda, who has an instinctive empathy for Dallapiccola’s idiom..Noseda’s pacing of the drama is impeccable, with no let-up of tension throughout the score’s 43 minutes, and the Danish National Symphony responds to every subtle nuance in his interpretation with playing of refinement and commitment.

What a piece, and what a performance: Dallapiccola’s taut one-act opera about a prisoner subjected to the most underhand psychological torture by the Spanish Inquisition was premiered on Italian radio in 1949, and Noseda’s tightly-wound account proves that the absence of visuals in no way lessens its dramatic impact, with German-Hungarian baritone Michael Nagy a revelation in the title-role.

The Italian’s version of serialism is an approachable vehicle for this gripping drama; Noseda directs a performance of passion.

Dallapiccola’s own version of Schoenberg’s 12-note method gives his orchestral music its wiry strength and his vocal lines their fiercely concentrated lyricism. On the latest instalment of Gianandrea Noseda’s rather etiolated Dallapiccola series for Chandos, the balance between them is exactly right...Anna Maria Chiuri is powerfully effective as the Mother.