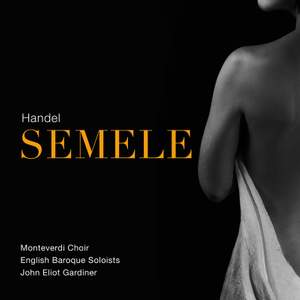 Alder is riveting in the title role as she mutates from soft seductress to vain brat to crushed victim, applying a range of styles to develop her character...Richardot’s intensity equals Alder’s,... — BBC Music Magazine, Christmas 2020, 5 out of 5 stars (Performance) / 4 out of 5 stars (Recording) More…

O Jove! In Pity Teach Me Which to Choose (Live)

Your Tuneful Voice My Tale Would Tell (Live)

Too Well I See (Live)

Iris, Impatient of Thy Stay (Live)

There, from Mortal Cares Retiring (Live)

Awake, Saturnia, from Thy Lethargy! (Live)

O Sleep, Why Dost Thou Leave Me (Live)

Let Me Not Another Moment (Live)

Lay Your Doubts and Fears Aside (Live)

You Are Mortal and Require (Live)

How Engaging, How Endearing (Live)

I Must with Speed Amuse Her (Live)

By My Command (Live)

Where'er You Walk, Cool Gales Shall Fan the Glade (Live)

Dear Sister, How Was Your Passage Hither? (Live)

But Hark! The Heav'nly Sphere Turns Round (Live)

More Sweet Is That Name (Live)

My Will Obey (Live)

Obey My Will, Thy Rod Resign (Live)

My Racking Thoughts by No Kind Slumbers Freed (Live)

Myself I Shall Adore (Live)

Be Wise As You Are Beautiful (Live)

Thus Let My Thanks Be Paid (Live)

Come to My Arms, My Lovely Fair (Live)

Ah, Whither Is She Gone, Unhappy Fair? (Live)

Ah me! Too Late I Now Repent (Live)

How I Was Hence Remov'd (Live)

Despair No More Shall Wound Me (Live)

See from Above the Bellying Clouds Descend (Live)

Happy, Happy We Shall Be (Live)

Recording of the Week, Handel's Semele from John Eliot Gardiner

"In Spring 2019, the Monteverdi Choir and English Baroque Soloists, led by John Eliot Gardiner, presented a critically-acclaimed European tour of Handel’s opera 'Semele', including Alexandra Palace Theatre in London, where this live recording took place. Semele had not been performed by John Eliot Gardiner and the Monteverdi ensembles since they originally recorded it in the 1980s and this recording gives listeners the chance to hear a fuller version of the work. A glamorous team of young soloists joins the Monteverdi ensembles to bring the story of Semele to life, including celebrated English soprano Louise Alder, who takes on the title role, with the young tenor Hugo Hymas portraying the amorous Jupiter. ""Semele’s musical score is a glorious blend of irresistible solo arias - some virtuosic showstoppers, others lyrical, sensual and evocative, ensembles, duets, accompanied recitatives and (unlike his operas) imposing choruses. Still more than when I first performed it and recorded it almost forty years ago, I feel Semele’s time has finally come.""John Eliot Gardiner"

Alder is riveting in the title role as she mutates from soft seductress to vain brat to crushed victim, applying a range of styles to develop her character...Richardot’s intensity equals Alder’s, but with less subtlety...Countering her bluster is Hugo Hymas’s warm tenderness as Jupiter, and an always-inventive finessing of Handel’s dense score by the band and choir...Despite Gardiner’s caprices, this Semele production is gorgeous, and among the best ever.

...the performance is, as expected, excellent. Louise Alder’s Semele is suitably light and demented in her famous aria, while Juno’s Lucile Richardot has a rich and forceful tone, something one might expect of the jealous goddess. Hugo Hymas’s Jupiter can sound a tad thin at times, but he is accurate in terms of phrasing and pitch. And, of course, the rest of the cast follows suit. In short, this is a wonderful recording.

A new recording is always welcome, especially when it comes from someone who knows his dramatical business as John Eliot Gardiner does...Alder is a happy choice, her voice rich, fluid and precise, and her agile and alert acting skills finding ideal projection in the wonderful clutch of arias Handel sets before her..Hymas has just the smooth vocal beauty needed for a sympathetic Jupiter.

As would be expected, Gardiner’s approach differs considerably from that of the recording made nearly 40 years earlier. Indeed, it not only differs but might be said in many ways to be diametrically opposed to it…he now very evidently conceives the score in as operatically dramatic a fashion as possible...Alder’s bright Semele is most satisfying in lyrical arias..Hymas is a pleasing light lyric tenor with a tone not unlike that of Anthony Rolfe Johnson.

Alder’s titular ambitious mortal socialite surely takes the laurels...Her doomed divine sugar-daddy, sung by Hugo Hymas, is cut from similar cloth; his glib assurances to Semele are airily self-confident, thanks in no small part to Hymas’s light, young-sounding tone...Richardot is clearly having enormous amounts of fun chewing the scenery as a goddess driven to the brink of insanity by her desire for revenge.

Gardiner’s trump cards are his famous choir — thrilling in the great choral reaction to Semele’s death, O Terror and Astonishment! — and Louise Alder’s entrancing Semele, who makes every highlight...Hugo Hymas’s young Jupiter is an appealing, stylish Handelian. Gardiner is in his element with this great piece.

In the British soprano Louise Alder we have a new and brilliant young Semele...Fine contributions, too, from Lucile Richardot’s Juno/Ino and Gianluca Buratto’s Cadmus. The loyal and committed Monteverdi Choir and English Baroque Soloists (leader Kati Debretzeni) shine as ever.

[Alder] is one of the show’s two big stars, thrillingly responsive to word and mood, whether woozy from sleep and sensuality, lost in self-love, or fading away at the end after a collision with Jupiter’s lightning. And the other star? Handel, of course. Packed with variety, witty, dramatic, Semele is so much fun.