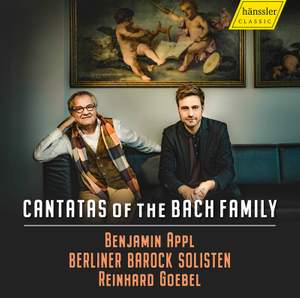 Offer, Cantatas of the Bach Family

Appl, warm, intimate, colouring his voice just so, is at his superbly expressive best in the quasi-operatic drama of Pygmalion, with its wide emotional range, or the thrust of Carl Philipp Emanuel’s... — BBC Music Magazine, September 2020, 3 out of 5 stars More…

Solo cantatas by Johann Sebastian Bach and his sons. An extraordinary talented family left its footprints in the musical history of Europe. Appl started in music as a young chorister at the renowned Regensburger Domspatzen, later continuing his studies at the Hochschule für Musik und Theater München and eventually at the Guildhall School of Music & Drama in London. He had the good fortune of being mentored by the legendary singer Dietrich Fischer-Dieskau. The Berlin Baroque Soloists ensemble was founded in 1995 by members of the Berlin Philharmonic, alongside early music specialists. Their aim was to present high-level performances of early music on modern instruments. Reinhard Goebel specialises in the repertoire of the 17th and 18th centuries. As an ex- pounder of period performance practice for both early music ensembles and modern or- chestras, and as an endless fount of knowledge about gems of the repertoire, he is a worldrenowned specialist. ӛ n May 2018 he was named artistic director of the Berliner Barock Solisten.

Appl, warm, intimate, colouring his voice just so, is at his superbly expressive best in the quasi-operatic drama of Pygmalion, with its wide emotional range, or the thrust of Carl Philipp Emanuel’s cantata ‘Ich bin vergnügt mit meinem Stande, which opens the recording…Appl occasionally sounds a little overwhelmed by the orchestra and unsupported, vocally, which is the caveat to the whole.