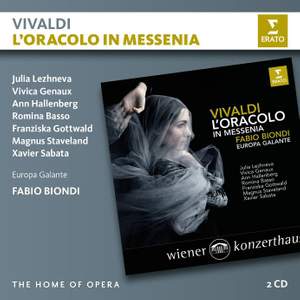 For this world-premiere recording of L’oracolo in Messenia, an opera Vivaldi revised for Vienna in 1740 after its premiere in 1737 in Venice, Vivaldi expert Fabio Biondi has reconstructed the work from literary and musical sources. He leads this triumphant performance, which opened the 2012 Resonanzen festival in the Austrian capital. “An exquisite line-up of singers … the powerful, trumpeting mezzo of Ann Hallenberg … Vivica Genaux, lavishly deploying her vocal splendour on lyrical music … the special virtuosity of Julia Lezhneva with her almost bird-like fluency.” (Die Presse, Vienna)