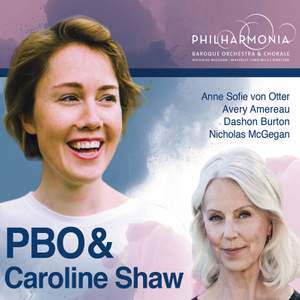 Caroline Shaw: Is a Rose & The Listeners (Live)

The Listeners explores the precious cargo of the Voyager space probes… Shaw’s imaginative score, performed with real verve by the PBO, conjures both the ancient and the dazzling mysteries of... — BBC Music Magazine, July 2020, 4 out of 5 stars More…

Since 2015, Philharmonia Baroque Orchestra & Chorale and Pulitzer Prize- and GRAMMY Award-winning composer Caroline Shaw have developed a strong artistic relationship. Alongside Shaw's first commission for the organization, a song called "Red, Red Rose" composed for the Orchestra and mezzo-soprano Anne Sofie von Otter, PBO established its New Music for Old Instruments initiative, an effort to commission and perform new works written expressly for period instruments. Subsequently, Shaw wrote two more songs for PBO and von Otter ("And So" and "The Edge"), and in 2019 composed a large-scale oratorio for the Orchestra, Chorale, and soloists Avery Amereau and Dashon Burton entitled The Listeners. This CD encompasses PBO's blossoming relationship with Caroline Shaw, featuring the full collection of PBO/Shaw commissions thus far.

The Listeners explores the precious cargo of the Voyager space probes… Shaw’s imaginative score, performed with real verve by the PBO, conjures both the ancient and the dazzling mysteries of space travel…The three songs of Is a Rose similarly traverse time…By turns luxurious and restrained, the piece is head in a radian performance from Anne Sofie von Otter with beautifully pliant orchestral accompaniment to complete this excellent disc.

Simply put, both the works and its performances are masterpieces, ingenious fusions of old and new. Shaw’s voice as a composer is singular and unmistakable. Not only is she among the most technically skilled composers working today, she is also one of the most gifted conceptually. The music is cinematic, but not superficial, profound without affectation. Moreover, both works benefit from devoted, sophisticated performances.

[In Is a Rose] pop-song-like inflections and melodic shapes are melded with PBO’s period-instrument, rosin-tanned timbres and brittle harpsichord to create a subtly arresting musical alchemy. This reflective backdrop provides Anne Sofie von Otter’s resonant mezzo voice with enough time and space to weigh up each word and line with delicate nuance...An altogether more dramatic and dynamic approach is taken in the other work on this recording, The Listeners.