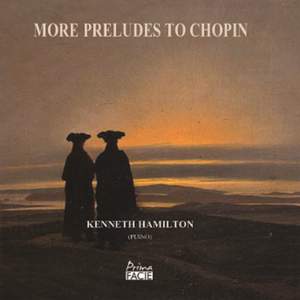 ...here is a release that stands out from the crowds by a country mile. Well recorded, played with real mastery and including fabulously but unsurprisingly eloquent notes by Hamilton himself,... — Fanfare, September/October 2020 More…

Hamilton writes: "I was delighted, encouraged and touched by the reception of Preludes to Chopin. More Preludes to Chopin is the second instalment of what will eventually be a three-CD cycle, presenting all of Chopin's preludes as prefaces to longer pieces. As with the original CD, this new recording shares its inspiration with that of my book After the Golden Age: Romantic Pianism and Modern Performance (Oxford University Press): a fascination with the performance styles of the so-called "golden age" of pianism from Chopin and Liszt to Paderewski--from around 1830 to 1945--and an abiding interest in how Romantic and late-Romantic approaches might be adopted or adapted in a modern context to enrich our own playing."

Preludes to Chopin attracted intense attention for the originality of its performance style. For Dr Chang Tou Liang of the Singapore Straits Times it offered "a new way of listening to Chopin". Stefan Pieper (Klassik Heute) commented: "Hamilton's approach to Chopin ignores the pianistic fashions of today's music market, challenges the dogmas of historical performance practice, and offers an entire palette of new and intriguing experiences"; while James Manheim (AllMusic) wrote: "The commercial success of this release shows how strongly audiences hunger for fresh interpretations of mainstream repertory, and a fresh interpretation is exactly what you get."

This new recording features a strikingly eloquent later version of Chopin's famous Nocturne op.9 no.2 using the composer's personal variants, an epic rendition of the dramatic C minor Nocturne inspired by Chopin's own interpretative advice to his students, and a gripping performance of the great Polonaise-Fantasy. The CD is accompanied by Hamilton's fascinating notes on the pieces and their performance history.

...here is a release that stands out from the crowds by a country mile. Well recorded, played with real mastery and including fabulously but unsurprisingly eloquent notes by Hamilton himself, any lover of Chopin’s music—and, indeed, of piano playing—should acquire this urgently and then take it as a starting point for further explorations.