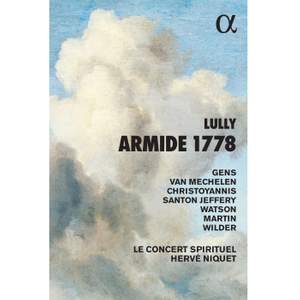 The story is a splendid vehicle for Véronique Gens…She is in glorious voice...Van Mechelen is ideal as his namesake, mellifluous and attentive to the text. The other singers, familiar specialists... — Gramophone Magazine, October 2020 More…

" Plus on connaît l'Amour, et plus on le déteste"

"Plus on connaît l'Amour, plus on le déteste" II

Armide, premiered in 1686, was the last joint work of Lully and the poet Philippe Quinault. It immediately became a pillar of the Opéra's repertory, which it finally left only in 1766, when it was removed to make room for a new wave of composers, Philidor, Grétry, Gossec and soon Gluck. A few attempts to restore former tastes still allowed audiences to hear such works as Persée, revived in 1770 (and recorded in that version by Hervé Niquet, ALPHA967). But these operas were profoundly modified in order to increase the role of the orchestra and tailor the vocal numbers to the singers of the day. This was the context for the fascinating and unpublished version of Armide that has lain dormant in the Bibliothèque Nationale for more than two centuries. The revisions to the original are by Louis-Joseph Francoeur, nephew of the celebrated François Francoeur, one of Louis XV's court musicians. This recording of the 1778 version of Armide, made at the Opéra Royal du Château de Versailles in collaboration with the Centre de Musique Baroque de Versailles, is not merely the first modern performance but the work's world premiere, since none of its music was ever actually played at the time. It enables us to grasp the evolution of the ideas and practices of French music over a whole century.

The story is a splendid vehicle for Véronique Gens…She is in glorious voice...Van Mechelen is ideal as his namesake, mellifluous and attentive to the text. The other singers, familiar specialists in this repertoire, are excellent, Tassis Christoyannis especially robust in the extended scene for Hate. Le Concert Spirituel and Hervé Niquet are in fine form.

Gens is in magnificent voice, singing with an imperious tonal versatility ranging from gloriously free and expansive top notes to chest notes of real power and richness, at times fearsome in their intensity...Niquet draws committed playing from Le Concert Spirituel, whose strings are especially responsive.

This may not be authentic Lully, but it serves as a post-Gluckian vehicle for Véronique Gens, at her peak as a lyric tragedienne with her eloquent declamation of the text and dramatic conception of the titular anti-heroine. Reinoud van Mechelen sings his namesake, Renaud, in exemplary style and Tassis Christoyannis is a striking Hidraot.

Hervé Niquet conducts with considerable style – it would be tempting to underline Armide’s old or new style, but Niquet finds a gracious balance, enjoying the dramatic outbursts yet relishing the orchestral effects. Most importantly, he finds a series of continuing tempi that propel the drama but don’t lurch, in an opera that could easily become disjointed or merely a series of numbers…the title role suits Véronique Gens perfectly.