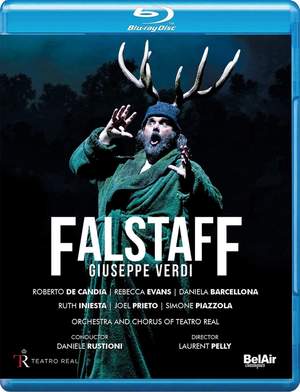 None of Pelly’s characters is especially appealing...Fortunately, the musical performances are stronger than the production. Daniele Rustioni has proved his worth in Verdi, particularly with... — Opera, January 2021 More…

Out of Verdi's adoration for Shakespeare three masterpieces were born: Macbeth, Otello and, as a musical testament, his only comedy Falstaff. Shakespeare's most famous and subversive comic character has indeed proved to be a fertile ground for Verdi who, then eighty years old, signed with Falstaff his most modern, most ambitious, but also wisest and most ambiguous opera. It was high time that French stage director Laurent Pelly, an eminent specialist of the buffa repertoire, tried out his talents on this whimsical music drama: a task he performs with absolute mastery, highlighting with remarkable subtlety the numerous comic devices invented by Verdi and Boito but also pondering on the equivocal morality of the argument. He is, of course, helped in this endeavour by a wonderful team of singers: from baritone Roberto de Candia to mezzo soprano Daniela Barcellona as Mrs Quickly, without forgetting the exceptional Simone Piazzola as Ford, Rebecca Evans as Alice, or Ruth Iniesta and Joel Prieto as Nannetta and Fenton.

None of Pelly’s characters is especially appealing...Fortunately, the musical performances are stronger than the production. Daniele Rustioni has proved his worth in Verdi, particularly with his fine work at Opéra de Lyon, and he steers the score deftly...Roberto De Candia is a decent Falstaff, robust of voice without pressing his instrument too hard...Rebecca Evans is a prim and proper Alice, and her soprano is in good shape, matched by Maite Beaumont’s attractive Meg.