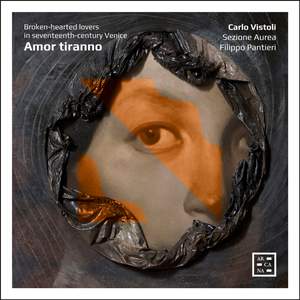 Following the success of 'Arias for Nicolino', a musical portrait of the celebrated castrato of Handel's era (A427), Carlo Vistoli turns his attention to Venetian opera of the seventeenth century. The Italian countertenor - 'a voice [...] intrinsically beautiful, strong and powerful' (Opera Magazine) - has been delving into this repertory since the beginning of his international career with specialists such as Leonardo García Alarcón, William Christie and John Eliot Gardiner. In this anthology accompanied by the ensemble Sezione Aurea, the focus is on operatic scenes and chamber music by the leading composers of the time, such as Francesco Cavalli and Claudio Monteverdi, whose famous aria 'Sì dolce è 'l tormento' exemplifies the linking thread of the arias in this recording: disappointed lovers. They express their disillusion not only through lamenti, but also in a lighter, more humorous fashion that can include dance forms, as in the chaconne 'Amanti, io vi so dire' by Benedetto Ferrari, a lesser-known but historically important composer who, like Filiberto Laurenzi and Francesco Sacrati, contributed to the development of the dramma per musica as a genre.

It all makes for an ambitious and well-planned programme, sung by Vistoli with intelligence and sensitivity.