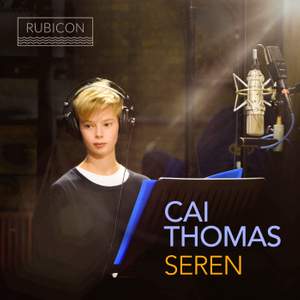 A 12-year-old boy treble with a delightfully pure, untroubled voice...The title is the Welsh word for “star”. He certainly can ping home the top notes, though Handel arias might best be left... — The Times, 3rd April 2020, 3 out of 5 stars More…

Brunning: The Lord is my Shepherd

Praised for his musicality and exceptional voice, Cai Thomas has already built up a global following and has featured in segments for ITV news and Classic FM. Following a successful Kickstarter funding campaign and, with the help of his family, friends, local community and hundreds of new friends from around the world, Rubicon Classics is proud to support Cai for the release of his debut album.

In ‘Seren’ (meaning ‘Star’ in Welsh), the young treble will be singing some of the nations’s best-loved choral and traditional songs, with stunning arrangements from the likes of Donald Fraser, David Hill and Fedor Vrtacnik.

A 12-year-old boy treble with a delightfully pure, untroubled voice...The title is the Welsh word for “star”. He certainly can ping home the top notes, though Handel arias might best be left until increased age and emotional experience arrive...Look upon this album kindly as a bloom of spring and sign of hope in a darkened world.