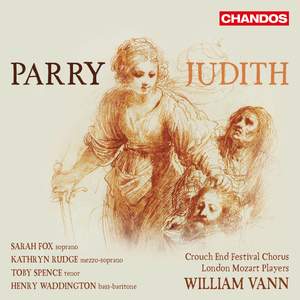 On the evidence of these CDs, conductor William Vann totally believes in this piece; he offers a compelling reading, drawing from the excellent Crouch End Festival Chorus and LMP (all of whom... — Choir & Organ, May 2020, 5 out of 5 stars More…

Draw Near and Worship, O My People!

Hear Ye, The Word of Your God!

O Mother, Tell Us Once Again

Long Since in Egypt's Plenteous Land

Great Queen! The King Calls for His Children

Lady! Thou Queen of Israel!

Now Shall the Lord Jehovah Visit You

Who Is This That Raileth at Moloch?

Fear Not, My People

The Host of Assur Is Like a Swarm of Locusts

Jerusalem Was Loved of the Lord

Fly! Fly! The Host of Assur Is Come on Us

Jerusalem, That Was Queen of the Nations

I Will Bear the Indignation of God

The Lord Is Long-Suffering and Merciful

Our King Is Come Again from Distant Lands

Behold, How Great Is the Mercy of Our God

Hear Ye the Words of the Captain of the Great King

Woe! Our Citys Walls Are Broken

Let Us Give Thanks unto the Lord Our God

I Pray Thee, O God of My Fathers

The God of Our Fathers Give Thee Favour

See Ye the Campfires of the Host of Assur

Ho! Ye upon the Walls

I Will Sing unto the Lord

Put Off, O Jerusalem, the Garment of Thy Mourning

Recording of the Week,  Charles Hubert Parry's Judith from William Vann and the London Mozart Players

Parry’s 1888 oratorio on the Apocryphal tale of an avenging Jewish widow emerges as a worthy successor to Mendelssohn’s Elijah in this gripping world premiere recording with Sarah Fox, Kathryn Rudge and Toby Spence.

Recorded after the first London performance for over 130 years, Parry’s neglected oratorio here appears on disc for the very first time. Having been commissioned by the Birmingham Festival, Parry decided to combine the Old Testament stories of Manasseh and Judith. A good deal of the libretto was provided by Parry himself, who took other texts from the biblical books of Isaiah, Psalms, and Judith. Having originally conceived the work in four acts, Parry condensed it into two. Judith was premiered by Richter in Birmingham in August 1888, and it consolidated Parry’s reputation as a choral composer, numerous performances following in Edinburgh and in London. Although popular in his lifetime, Judith fell into obscurity after Parry’s death.

On the evidence of these CDs, conductor William Vann totally believes in this piece; he offers a compelling reading, drawing from the excellent Crouch End Festival Chorus and LMP (all of whom would have been new to the piece) a thrilling account. The soloists are all on fine form, with Sarah Fox in the title role singing with burnished tones, and Toby Spence as the conflicted king exploiting his ringing top register.

Every aspect of this performance sounds like a labour of love. Rudge’s soaring, expressive singing as Meshullemeth gives the piece its real heart, and she’s accompanied with intense sympathy by the conductor William Vann, who avoids any suggestion of bombast or sentimentality, and builds Parry’s great paragraphs so eloquently and with such assurance that you’d think he’d been conducting this music all his life.

A major and distinguished addition to the Parry discography.

At its best, it’s stirring stuff indeed, and the choral writing in places anticipates the grandeur of Elgar’s Gerontius...the Crouch End Festival Chorus have a whale of a time baying for blood to appease their pagan god Moloch in Act One, and are equally impassioned in the wonderful lament for the dispossessed Jews of Jerusalem...The London Mozart Players play out of their boots for William Vann, who directs with terrific drive and impetus, and the low brass-winds and percussion literally have a blast in the numerous death-or-glory outbursts.

It’s all you might imagine a grand piece by Parry to be: resolute, bold, melodic – and surprising: the tune for the hymn Dear Lord and Father of Mankind was lifted directly from this piece. Vann and his excellent forces make a convincing case for more performances.

You don’t have to be Parry’s champion Prince Charles to feel a thrill as the soprano Sarah Fox rings out as Judith, the Crouch Enders exult, the tenor Toby Spence sonorously conveys the vacillating king Manasseh and Parry creates sequences of stirring clamour. Give it a spin