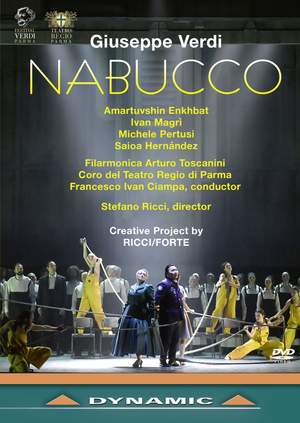 Enkhabat’s striking presence and strong, disciplined singing mark Nabucco out as a standard military dictator. Though not always in perfect vocal control, Saioa Hernández is an energetic, grand-scale... — BBC Music Magazine, June 2020, 2 out of 5 stars (Performance) / 4 out of 5 stars (Picture & Sound) More…

Recorded at the 2019 Festival Verdi in Parma this is a coproduction between Teatro Regio and HNK Zagreb. The powerful staging by Stefano Ricci and Gianni Forte was awarded the Abbiati prize in 2018. The action takes place in 2046 on a military ship, which reminds us of an Ark. This performance has many references to the contemporary world and portays a dystopic society. Nabucco is turned into an oppressive dictator who is obsessed with his own image. The Hebrew slaves are portayed as refugees wearing life vests, while on the ship's deck there are various screens displaying the regimes propaganda.

Enkhabat’s striking presence and strong, disciplined singing mark Nabucco out as a standard military dictator. Though not always in perfect vocal control, Saioa Hernández is an energetic, grand-scale Abigaille…Ciampa gives an authoritative account of the score aided by an orchestra of commendable quality and an impressive chorus.

It is distinguished by excellent, all-guns-blazing singing and very fine conducting from Francesco Ivan Ciampa. He encourages the Filarmonica Arturo Toscanini to bring a depth to the score that retains the swagger and dash of early Verdi but also finds a nobility and grandeur that points to later triumphs

What makes the production tolerable is that, despite all this, it somehow allows three outstanding singers to give credible portrayals. Amartuvshin Enkhbat’s splendid, full-bodied baritone serves Nabucco’s music ideally..Another singer on the ascendant is Saioa Hernández, for whom the challenges of Abigaille hold no terrors...Ciampa presides over a persuasive reading of the score that does not overly indulge Verdi’s youthful enthusiasm.