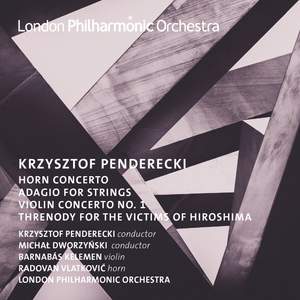 Recorded live under Penderecki’s baton, this disc is a terrific tribute to the great composer. With moments of shimmering subtleties and immense, piercing walls of sound, this is an utterly electric... — BBC Music Magazine, July 2020, 4 out of 5 stars More…

Penderecki: Tren (Threnody), "To the Victims of Hiroshima"

“The LPO string-players vividly felt the music’s pain. They don’t write music like that anymore” - Classical Source on Threnody for the Victims of Hiroshima, 14 October 2015

The Adagio for Strings and Horn Concerto on this album, both conducted by the composer, are recordings of the UK premiere performances.

Krzysztof Penderecki wrote the Horn Concerto specifically for soloist Radovan Vlatković. The Guardian described this performance as impressive, and having a “disquieting, at times savage beauty,” while

The Telegraph called it “fantastically fluent” with “genuinely entrancing [moments].”

This is also the first release on the LPO Label featuring conductor Michał Dworzyński. He is renowned as a great champion of music by Polish composers. His interpretation of the Violin Concerto was

praised by The Guardian for capturing “the work’s fraught, tightly bound texture and the imploded lyricism of its constantly evolving melodic material.”

The Threnody for the Victims of Hiroshima is an iconic work by Penderecki which received the UNESCO Prize in 1961. On its dedication to Hiroshima, Penderecki wrote “May this threnody

express my deep belief that the sacrifice of Hiroshima will never be forgotten and lost, and Hiroshima will become a symbol of brotherhood between people of good will.”

Recorded live under Penderecki’s baton, this disc is a terrific tribute to the great composer. With moments of shimmering subtleties and immense, piercing walls of sound, this is an utterly electric listen.

All the works here, except the First Violin Concerto, are conducted by Penderecki himself, so hearing them with the LPO in the Festival Hall immediately makes this a special document, and it is a fascinating compilation of the orchestra’s performances of his music in recent years. The LPO is consistently excellent throughout.