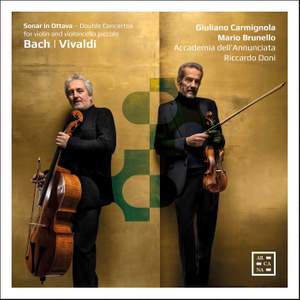 The soloists are not only superb virtuosos but they converse with the rapport of chamber musicians, and are keenly aware of period style…They parry with daring abandon Vivaldi’s barrage of challenges…while... — BBC Music Magazine, July 2020, 5 out of 5 stars More…

Violinist Giuliano Carmignola and cellist Mario Brunello: one of greatest interpreters of Vivaldi and Bach, whose recent recording of the Sonatas and Partitas was described by the authoritative magazine Gramophone as ‘a definite first choice among period instrument recordings of these works’; and his long-time friend Mario Brunello, acclaimed for his personal reinterpretation of that same famous collection on the violoncello piccolo (A469).

Giuliano Carmignola became an exclusive artist of Deutsche Grammophon in 2003, with his debut outstanding album Concerto Veneziano being released in 2005. Accompanied by the Milanese ensemble Accademia dell’Annunciata, they offer a highly original, experimental programme. Inspired by the three existing double concertos for violin and cello by Vivaldi – an unusual coupling in ighteenth century concerto literature – they revisit double concertos by Vivaldi and Bach (the famous BWV 1043 for two violins and BWV 1060 for violin and oboe), transposing the second solo part an octave lower on the violoncello piccolo. Underpinned by persuasive historical and musicological evidence, the approach first and foremost reveals their pleasure in working together on an innovative project. The outcome is a delightful opportunity to enjoy famous pieces in a totally different light.

The soloists are not only superb virtuosos but they converse with the rapport of chamber musicians, and are keenly aware of period style…They parry with daring abandon Vivaldi’s barrage of challenges…while to Bach’s Teutonic idiom they bring Italian fire and lyricism These are high-risk performances, both soloists preferring raw expression to mere beauty of sound.

Taken as a whole, this is a wonderful program. Despite occasional awkwardness, the adaptations are generally sensible, musically and sound natural enough. Moreover, Carmignola and Brunello are consummate interpreters of the music, and the performances are consistent and idiomatic...the adaptation and the orchestral works alike offer new perspectives on well-known repertoire.

This disc will divide listeners. There are many who, no doubt, will find the performances exciting. Certainly, at no point is the technical facility of soloists Giuliano Carmignola and Mario Brunello under question: both whizz up and down their instruments with undeniable flair. For listeners more like myself, however, it is just too much to take: a style of musicmaking that carries more sense in the flesh.