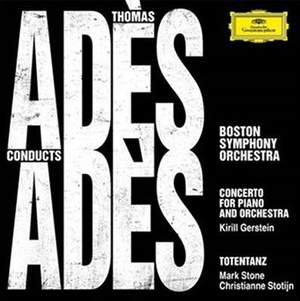 [The Piano Concerto] is immediately compelling, conducted here by the composer with pianist Kirill Gerstein, who inspired it, and  the Boston Symphony Orchestra, who then commissioned it, raucous... — BBC Music Magazine, May 2020, 4 out of 5 stars More…

Adès: Concerto for piano and orchestra

Thomas Adès conducts the Boston Symphony Orchestra in performances of two of his own works: the Concerto for Piano and Orchestra, and Totentanz.

In March this year, Thomas Adès, one of the most acclaimed and most frequently performed contemporary composers of our time, conducted the Boston Symphony Orchestra and Kirill Gerstein performing the world premiere of his Concerto for Piano and Orchestra. Comissioned by the BSO for Kirill Gerstein the work already is becoming part of the concert repertoire worldwide.

This live recording of what turned out to be a ravishing celebration of contemporary music, receiving rapturous response from audience and critics alike, is paired on the album with Adès’s 2013 work Totentanz.

Totentanz brings together baritone (Mark Stone) and mezzo-soprano (Christianne Stotijn) soloists with a (very) large orchestra, unfolding a dialogue between a charismatic and gleefully macabre Grim Reaper and the procession of his many victims, from Pope to Maiden and Child.

[The Piano Concerto] is immediately compelling, conducted here by the composer with pianist Kirill Gerstein, who inspired it, and  the Boston Symphony Orchestra, who then commissioned it, raucous in response…Trumpets then herald Adès’s brilliant, rattling death dance…It’s harrowing, thrilling stuff, Mark Stone’s implacable baritone wielding Death’s relentless scythe as skeletons tap-dance in the orchestra and mezzo soprano Christianne Stotijn alternately bemoans and pleads.

Since there’s no doubting the theatrical effectiveness of both works, I have no hesitation offering a recommendation. No living composer exhibits the tools of the orchestral trade better than Adès, who surpasses even John Adams in that department. Anyone allergic to protracted dissonance also has little to fear, since Adès freely moves in and out of tonality.

Gerstein and the Boston Symphony pull the piano concerto off with flair but this performance [Totentanz] is a cut above...it can hardly have sounded as focused or as forensically brilliant as in Boston, with the same structural nous, sustained tension (tempos and volume are expertly ratcheted) and pronounced undertow...for proof that Adès does what he does with mind-boggling brilliance, look no further.

Kirill Gerstein offers a vigorous and bracing reading of Adès’ Piano Concerto. Premiered by Gerstein in 2018 after a gestation period of six years, the piece has been aptly described as ‘utterly contemporary yet simultaneously rich with reference to tradition...paradoxically, it is the strength and originality of Adès’ voice that strikes you at every turn.

Gerstein slips between tender introspection and ferocious virtuosity with breathtaking ease…[Totentanz is] a stunningly descriptive work that is given an equally sensational performance here. Coupled with the Piano Concerto it makes for one of the most striking discs of contemporary music that I have come across for some time.

The concerto is cast in three fast-slow-fast movements and the piano part, brilliantly played by Gerstein, pays homage to the virtuoso tradition that culminated in the three concertos of Bartok. It is both accessible and imaginatively orchestrated. Totentanz (2013) hovers more grittily between Das Lied von Der Erde and Songs and Dances of Death.

[Totentanz] seems more original than ever – a series of vivid, sometimes grotesque scenes, with baritone Mark Stone in superb form as Death and mezzo Christianne Stotijn portraying his successive victims.

[The Piano Concerto's] eye-catching novelty lies, perversely, in its respect for the past...dead people’s fingerprints are everywhere, next to Adès’s asymmetrical smudges...Totentanz has a virility and emotional resonance that suggests a work with a long life ahead.