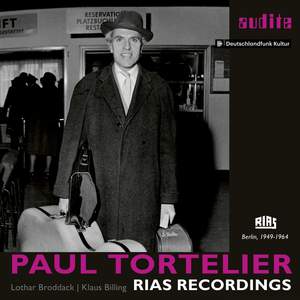 The recordings…were for a live audience so silent that these could be labelled ‘studio’ events. And the selection here, released for the first time, testify both to his versatility and his excellence... — BBC Music Magazine, June 2020, 5 out of 5 stars More…

Paul Tortelier (1914-1990), one of the outstanding cellists of his generation, set benchmarks. Paul Tortelier was, alongside Pierre Fournier, the greatest French cellist of his time and one of the most sought-after internationally. He launched his career, which lasted well over 50 years, in the late 1930s.

In these chamber and solo works from Bach through to early modernism, Tortelier’s expressive and elegant playing comes into its own. This edition presents chamber music recordings from the archives of Deutschlandfunk Kultur: an impressive illustration of this great cellist’s enormous range

of repertoire at an early peak of his career. Three works included here are now available for the first time on CD in his interpretations: Robert Schumann’s Fantasiestücke, Op. 73, Alfredo Casella’s cello sonata in C major and Tortelier’s own Trois p’tits tours, of which only the third piece, Le Pitre,

has previously been available on disc. This release forms part of our series “Legendary Recordings”

and bears the stamp “1st Master Release”. The term stands for the exceptional quality of audite’s archive releases which are all, without exception, produced using original tapes from the radio archives.

The recordings…were for a live audience so silent that these could be labelled ‘studio’ events. And the selection here, released for the first time, testify both to his versatility and his excellence in his favourite repertoire…Tortelier’s style in Bach was restrained and smooth; legato, he said, should be key and his tempos were at times daringly slow.