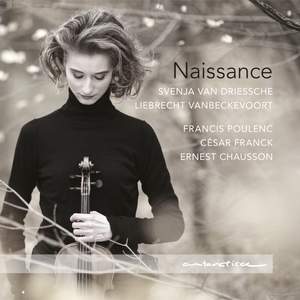 Two Belgian talents, violinist Svenja Van Driessche and pianist Liebrecht Vanbeckevoort join forces to record three of their favourite pieces including two pieces that are rarely recorded and lesser known to the public.

The Violin Sonata by Francis Poulenc is programmed alongside Poeme by Ernest Chausson in a version for violin and piano, and finally the well-known Sonata for Violin and Piano by Franck.

Svenja Van Driessche has been a rising star for several years. She has played recitals and concerts with reputed orchestras both in Belgium and abroad, including the Tallinn Philharmonic Orchestra, the Lviv Philharmonic, the Brussels Philharmonic and the Kamerfilharmonie. Both in 2007 and in 2010, Svenja became the first laureate of the Rotary Breughel Competition for strings and was awarded the Grand Prix Rotary Breughel. In 2009, she won the second prize at the international violin competition Bravo.