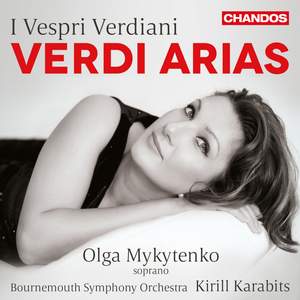 Here the size of voice is on the small side for some of the bigger roles: Amelia in Ballo and Leonora in Trovatore among them…There are decent accounts of tricky arias…but equally there are moments... — BBC Music Magazine, April 2020, 2 out of 5 stars (Performance) / 3 out of 5 stars (Recording) More…

Verdi: Liberamente or piangi (from Attila)

The Ukrainian soprano Olga Mykytenko has won numer ous international awards, including the Grand Prix at the Maria Callas International Singing Contest in Athens. Her extraordinary musicality, solid vocal technique, easy coloraturas, and strong expression allow her to sing major roles, from Iolanta, Mimì, and Nedda to Gilda, Violetta, and Lucia. Engaged for many years as a soloist at the National Opera of Ukraine in Kiev, where she made her debut, Olga has performed in opera houses and concert halls around the world. For this her debut album for Chandos, she brings her interpretations of many of Verdis greatest soprano roles from the stage into the studio. Her programme also spans the majority of Verdis operatic output, from Ernani (Elvira) via Macbeth (Lady Macbeth) through to I vespri siciliani (Elena) and of course taking in Violetta (La traviata), among many others, along the way. Accompanied by her compatriot Kirill Karabits and the thrillingly sympathetic Bournemouth Symphony Orchestra, this recital is a vocal and musical tour de force.

Here the size of voice is on the small side for some of the bigger roles: Amelia in Ballo and Leonora in Trovatore among them…There are decent accounts of tricky arias…but equally there are moments of insecurity and inaccuracy, particularly in the top register as well as in cadenzas. The Bournemouth Symphony Orchestra gives a good account of itself, though the accompaniments could do with more dramatic thrust.

She’s a serious artist, clearly, and a veteran of several major opera stages, and she obviously cares deeply about her craft. It doesn’t take long to build an idea of where her strengths are: mainly in a sturdy, often beautiful upper middle range. It’s a voice that lacks polish and richness on its surface, though, and a firm, steely core at its centre; there’s that hint of vinegar familiar from traditional spintos but without the attendant power.