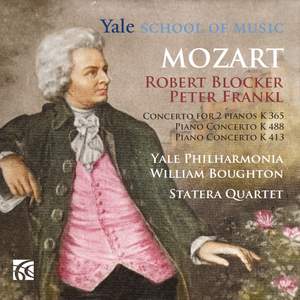 Peter Frankl’s appearance in K365 will delight his many admirers in the UK: his interpretative skill sounds undiminished, the partnership with Blocker well practised … a quietly delightful disc,... — International Piano, March 2020 More…

I. Allegro (Arranged for String Quartet and Piano)

Critics and performers have admired the beautiful melodies, colorful orchestrations, virtuosic displays and breadth of expression in Mozart’s piano concertos since he improvised many of the solo parts at their first performances. They contain some of Mozart’s most innovative formal experiments and intricate motivic developments. And, as is evident in this selection, each one is unique. Robert Blocker is an internationally acclaimed concert pianist who performs throughout the world. Blocker has been described by the Los Angeles Times as an artist of “great skill and accomplishment” who performs with “a measurable virtuoso bent and considerable musical sensitivity.” Pianist Peter Frankl made his London debut in 1962and his New York debut with the Cleveland Orchestra under George Szell in 1967. Since that time, he has performed with many of the world’s finest orchestras. In the United States he has been a regular guest artist at many leading festivals and has given master classes all over the world.

Peter Frankl’s appearance in K365 will delight his many admirers in the UK: his interpretative skill sounds undiminished, the partnership with Blocker well practised … a quietly delightful disc, nicely recorded