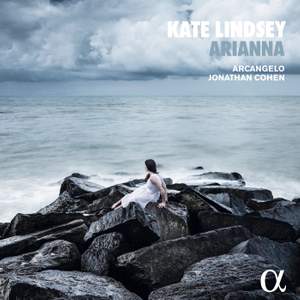 The American mezzo (currently starring as Nerone in Handel's Agrippina at the Metropolitan Opera) talks to Katherine about her new recording of cantatas by Alessandro Scarlatti, Handel and Haydn, released last month on Alpha.

After a first album dedicated to Weill, Zemlinsky and Korngold (Alpha272), Kate Lindsey explores here her other repertoire of choice, the music of the eighteenth century. In partnership with Jonathan Cohen and Arcangelo, she has recorded three cantatas focusing on the myth of Ariadne, abandoned on the island of Naxos after helping Theseus kill the Cretan Minotaur by giving him a ball of thread so that he could find his way back through the labyrinth. Alessandro Scarlatti's Ebra d amor fuggia (1707) relates Ariadne's flight, drunk with love , alongside Theseus, for whom she expresses her tenderness in the magnificent aria Pur ti stringo . The same year, the young Handel composed his cantata Ah crudel, nel pianto mio, this time with an anonymous abandoned lover as the subject. In 1789, Joseph Haydn also turned to Ariadne, in a cantata for which several orchestrations exist. The one recorded here is by Sigismund Neukomm, Haydn's pupil between 1797 and 1804. Three faces of disappointed love, brought to passionate life by the mezzo-soprano.

Ardent, brilliant, stately: mezzo-soprano Kate Lindsey probes the inner states of the mythical Cretan princess Ariadne…Cohen adds hugely to these performances, in the Haydn especially. Cohen takes risks with his tempos and dynamics, and by allowing the instrumentalists to sometimes push Lindsey aside; these pay off in many striking moments, for instance when Haydn’s heroine overtakes the band to sprint to her final cadence. Forget victimhood – here, Ariadne wins.

Her strong and assured voice slips easily into this music…and throughout she shows impressive technical control and agility. More strikingly, though, she brings her stage experience to bear in dramatic readings whose intelligent responses to the differing nuances of these three pieces are what really make the project spark...The playing of Arcangelo under Jonathan Cohen is typically high-quality, and often heartbreakingly attendant to the drama.

Lindsey sings [the Haydn] and cantatas by Scarlatti and Handel (based on music for the opera Agrippina) with vehemence in recitative and plush tone in the several arias.

With playing of verve and style by Arcangelo, this rewarding album offers a fine platform for Lindsey, pure-voiced, pliant, expressive – and versatile.

A marvellous vehicle for Lindsey’s dramatic gifts and chameleon skill in changing colours as these emotional rollercoasters sweep on...Whatever the music’s mood, Lindsey gives 100 per cent commitment to every word and note.

Lindsey demonstrates her emotional range to perfection. Jonathan Cohen’s conducting is hugely supportive and the recording shows a real partnership between soloist and players.