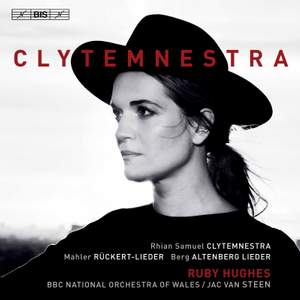 Samuel’s musical response is something of a tour de force - at once fiercely dramatic and always coherent…Hughes rises to the challenge with bombproof technical strength and control, plenty of... — BBC Music Magazine, March 2020, 5 out of 5 stars More…

No. 3, Über die Grenzen des All

No. 2, Lament for His Absence

The British soprano talks to Katherine about her new album featuring Rhian Samuel's Aeschylus-inspired monodrama and song-cycles by Mahler and Berg, out now on BIS.

In 2015, when Ruby Hughes discovered Clytemnestra by the Welsh composer Rhian Samuel, the work had not been performed since its première some 20 years earlier. Hughes describes the 24-minute score as ‘sun-scorched and luscious’ as well as ‘intensely visceral’, but in it she also heard echoes of Gustav Mahler and Alban Berg, two of Samuel’s influences. For her first album as soloist with orchestra, she has therefore devised a programme which brings together the three composers but which also spans a wide range of emotions and moods. For his Rückert-Lieder, Mahler selected five highly intimate and subtle poems by the great Romantic poet Friedrich Rückert, using his large orchestral forces sparingly in a chamber music style. Ten years later, in 1911, Berg found his texts closer at hand as he set contemporary poems by Peter Altenberg, one of the main proponents of Viennese impressionism. Berg's advanced harmonic language caused a scandal at the first performance in 1913, and the songs were only performed in their entirety in 1952, sixteen years after Berg’s death. For Clytemnestra, finally, Rhian Samuel assembled her own text, based on Aeschylus' tragedy Agamemnon and focusing Clytemnestra’s deep anguish at the death of her daughter and her need for revenge. Bringing this wide spectrum of human emotions to life, Ruby Hughes is supported by the BBC National Orchestra of Wales and conductor Jac van Steen.

Samuel’s musical response is something of a tour de force - at once fiercely dramatic and always coherent…Hughes rises to the challenge with bombproof technical strength and control, plenty of firepower when needed, and a thrilling instinct for capturing the persona of his fearsome anti-heroine. She gets impressive support from Jac van Steen and the orchestra, who have evidently rehearsed their demanding contribution up to the hilt.

Samuel’s musical language is accessible and powerful, with an appropriately craggy granitic strength to it...Jac van Steen gets excellent, vivid playing from the BBC National Orchestra of Wales but it’s Hughes’s performance that carries the whole enterprise: vivid, powerful and superbly committed, bringing a real complexity and vulnerability to the character. She’s impressive in the couplings, too, using her lightish soprano intelligently.

beautifully done, in a very satisfying account of the cycle, one of the best of recent years... this is highly recommended.

Commissioned by the BBC NOW in 1994 but neglected since, it explores – with rare insight, passionately expressed by Hughes – the motives that led Clytemnestra to murder her husband, Agamemnon.

Time and again on this album — usefully filled out with Mahler and Berg, predecessors audibly close to Samuel’s heart — soloist and composer make Clytemnestra’s wrenching drama something tangible...Her eloquence is always unfussy and direct. The instrumental fabric is equally strong, with beautiful playing from the BBC National Orchestra of Wales, on the top of its top form, conducted by Jac van Steen.