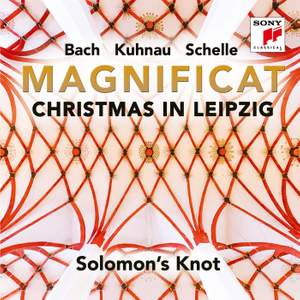 A glittering debut recording for the musicians, whose live sound has been decanted beautifully here in celebration of three of Leipzig’s finest. Bach’s offering shines brightest. — BBC Music Magazine, March 2020, 5 out of 5 stars More…

Opening with Schelle’s motet Machet die Tore weit, followed by Kuhnau’s Magnificat which provided Bach with the blueprint for his 1723 version in Eb (including Christmas lauds), Solomon’s Knot’s first-ever album traces the connection between the three ‘Johanns’ who were subsequently cantor at the Thomaskirche in Leipzig through their festive music for the Advent and Christmas period.

To emphasise what Solomon’s Knot stands for, the album had to be recorded live, which happened during the performance of ‘Christmas in Leipzig’ at the Barbican’s Milton Court in December last year. Created by James Halliday and Jonathan Sells who share the artistic responsibility of the collective, this programme was first presented by Solomon’s Knot at the 2015 Christmas Festival at St John's Smith Square, where the collective will return this year.

A glittering debut recording for the musicians, whose live sound has been decanted beautifully here in celebration of three of Leipzig’s finest. Bach’s offering shines brightest.

The singers take an extrovert, expressive approach to text that communicates best in festive choral sections. The opening of Kuhnau’s Magnificat shows them at the height of their powers: bright, powerful and more muscular than Bach Collegium Japan...The instrumentalists are similarly superb, with a blazingly joyful tone in the brass and superbly tight phrasing from oboes and violins. The standout solos are impressive throughout, both from singers and instrumentalists.