Leipzig's Thomaskirche is hallowed ground both literally and metaphorically - a place of pilgrimage for Baroque music-lovers, largely due to its association with JS Bach, who was Thomaskantor for nearly three decades and produced much of his finest music there. Yet the Thomaskirche was already a noted focus of musical activity well before Bach's time, and both of his predecessors were acclaimed composers and musicians in their own right.

It's these three illustrious Johanns - Schelle, Kuhnau and Bach - who are the focus of this début album from British early music collective Solomon's Knot. Jonathan Sells and his musicians explore some unique festive musical traditions that developed in German-speaking countries; two Christmas Magnificats are preceded by Schelle's stirring Advent motet (setting the ever-popular 'Lift up your heads, o ye gates' text), and the result is a fascinating picture of how Christmas might have been celebrated in Leipzig at the height of its musical magnificence.

I spoke to Jonathan about some of the musical connections that he draws together on this recording, and about changing musical tastes and styles from Enlightenment Leipzig down to our own time.

The difference between Kuhnau’s glowing tribute to Schelle as his musical predecessor, and the poor care actually taken of his manuscripts after his death, is striking. Did musical fashions shift very drastically and suddenly render Schelle embarrassingly uncool?

Fashions did of course change from one generation to the next – in that respect, we need to imagine people’s attitude towards art music at the time as being closer to our attitude towards pop music today. Think how the music of the 1980s or 90s has become ‘dated’. There was a respect for the past, and old music did survive, for example in the Florilegium portense, an anthology of sixteenth- and seventeenth-century motets that was used regularly in the Leipzig churches well into the eighteenth century. But composers, especially up-and-coming young ones who had recently replaced an older incumbent in a particular job, attempted to appeal to modern taste and style, and that created a distance with the recent past.

In Schelle’s case, by 1723 (the year that J.S. Bach succeeded Kuhnau as Kantor) the inventory of the Thomasschule stated that his manuscripts had ‘become damaged by their use and become nearly unusable’. On the one hand, the music was a victim of its own success, like an LP that had been played hundreds of times. On the other hand, no one saw fit at that time to make copies of Schelle’s scores and preserve them for future generations. Luckily, his music had spread far and wide across central and northern Germany, and about sixty of his cantatas have survived to the present day.

In terms of musical style, the opening section of ‘Machet die Tore weit’, with its exciting stretto imitation and sprung dactylic rhythms, could well have seemed pretty ‘cool’ even to a 1730s audience.

Both Kuhnau and Bach’s Magnificats are interspersed with the same Christmas-related texts, inserted at points where they act as commentaries or asides on the verses of the Magnificat proper (as with arias and chorales in a Passion setting). How did this kind of interpolation – presumably a festive embellishment – arise?

This so-called ‘troping’ of the Magnificat at Vespers on major feast days in German-speaking nations can be traced back to the fourteenth century. By the sixteenth century, the interpolations at Christmas were often Kindleinwiegen, or popular songs for the baby Jesus in the crib, also associated with the Christmas Eve liturgy. The choice of pieces was not set, and it is very likely that Bach deliberately chose the same texts as Kuhnau, although he integrated them into the Magnificat in a different way. The order that they appear is the same, but not the positioning, seemingly due to the different choices that the composers made in setting the Magnificat verses. That in turn suggests a different placement of each Laud movement, in order to achieve a balance of textures and styles.

The way that the Laud texts are set is at times wildly different – compare the two versions of ‘Vom Himmel hoch’, for example. Perhaps, however, one can detect at nod to Kuhnau’s lilting 3/4 ‘Virga Jesse’ in Bach’s version, whose flowing 12/8 metre breaks out into a wonderful cascade of semiquavers on the word ‘floruit’, to blossom or flourish.

You allude to Telemann’s Collegium Musicum siphoning musicians away from Bach’s band – but Bach would later head up that same society himself. How much do you think the relationship between the Collegium and the Thomaskirche was one of rivalry, and how much one of cooperation?

This is perhaps a slight misunderstanding from the wording of the liner notes: Telemann had founded the Collegium Musicum after his arrival in Leipzig at the age of 20 in 1701, and it quickly became associated with the Neue Kirche, a newly reopened church close to the Thomaskirche. This student band competed with the Thomaskirche under Johann Kuhnau, 21 years Telemann’s senior, and it is even thought that Telemann left Leipzig in 1705 partly due to that competition. Ironically, Kuhnau himself had led a collegium musicum in the 1680s! When Bach took over as Thomaskantor in 1723, the Neue Kirche also came under his remit, and with it the Collegium Musicum, which became an important resource for his music-making. Most the secular cantatas and a lot of his larger-scale instrumental music was written for this high-quality ensemble.

Kuhnau and Bach set the various movements of the Magnificat very differently, not just in Affekt but even in the choice of which voices to use. Do you think there’s any symbolic (even theological) significance to these, or is that reading too much into a purely artistic question?

Certainly in the case of the cantatas of JS Bach there are very often theological associations with voice types chosen for specific aria texts, and Bach was very sensitive to such symbolism. In this case we are dealing with the words of the virgin Mary (and additional insertions), and a Latin text which had played a central role in church liturgy for centuries and had therefore taken on a more abstract quality in musical settings.

It’s pleasing to note that Bach ‘followed’ Kuhnau in giving the first aria ('Et exultavit spiritus meus') to a soprano, and that both arias employ a springing figure that invites one to imagine the baby Jesus leaping in the virgin’s womb. By inserting ‘Vom Himmel hoch’ after this, Bach could avoid monotony but still give the following verse to a soprano, speaking of the ‘lowliness of his handmaiden’. Kuhnau chooses an alto voice.

There is an interesting contrast in the way the two composers set ‘Quia fecit mihi magna’ – here Kuhnau employs the full orchestral and vocal forces to convey God’s might, whereas Bach gives this text to a lone bass voice and naked continuo. It’s hard to know whether there is a touch of irony here (the music can easily lean towards pomposity), or whether this is simply a more private reflection in contrast to the universal choral expression of ‘omnes generationes’ that comes immediately beforehand.

There are strong similarities in these Magnificat settings too, such as the powerful semiquaver backbone of both versions of ‘Fecit potentiam’, the rhythm and rhetorical setting of the word ‘Gloria’ in the final doxology, and even the opening contour of the imitative material that each composer used for ‘Sicut locutus est’. This text invites an imitative setting (in Bach’s case a 5-part fugue, of course), as it describes the passing of a message from one generation to the next, stretching on into eternity. This not only provides a plausible genealogical lineage for the imminent (and fatherless) child, but also neatly encapsulates the passing of the musical baton from one Kantor to the next.

You take the “omnes generationes” section of the Bach at an extremely relaxed speed, compared to the drivingly insistent way it’s normally performed. Most of your other tempi are fairly lively – why did you decide to present this passage so differently?

I’m glad you picked up on this, because it’s a really interesting case. Essentially, we took the radical decision of doing exactly what it says in the score! At this point in the manuscript, where the soprano solo ends, Bach writes nothing at all: no new movement title, tempo indication, time signature, double barline… only the word ‘volti’ (turn) at the bottom of the page before the words ‘omnes generationes’ appear, and on the following page the additional instruments and voices are added. As Robert M. Cammarota first argued with impressive thoroughness in 2001, there is no justification for the approximate doubling of tempo that traditionally occurs here in modern performance, either theological (since Luther taught that this verse, which begins ‘Quia respexit humilitatem’, should be treated as a whole), or musico-traditional (as witnessed for example in Kuhnau’s aria setting). The fashion seems to have arisen from an editorial intervention in the mid-nineteenth century. Thus we also present these ‘two’ movements (even still presented as such in the Bärenreiter score) as a single track on the CD. I'm grateful to Timothy Roberts for first bringing my attention to it.

That isn’t to say sticking to the score didn’t present a challenge in rehearsal and performance. The change of gear at this point is so ingrained that we all had to relearn how this movement works, and strive for a satisfactory and appropriate tempo of both aria and chorus. However, it transforms the message of the piece: why on earth should ‘omnes generationes’ be so aggressive and agitated? It simply completes a sentence, and describes the continuing praise of Mary throughout the ages. Quite beautiful, and nothing to get so worked up about!

Interestingly, I discovered recently from a filmed performance that Vox Luminis had independently arrived at the same interpretation – nice to know that there are soulmates out there and that one isn’t completely barmy!

The image of Bach composing weekly cantatas is quite a well-known one, but in fact composition of new repertoire (rather than simply selecting programmes from a pre-existing library of works) seems to have been part of the job description for all three of these composers – which it certainly isn’t nowadays! When, and how, do you think this stopped being the case?

The French Revolution has an awful lot to answer for in the history of classical music. It was at this point, with the creation of conservatoires and the end of the master-apprentice model, that teaching became prescribed and institutionalised, and the historical distance to music of the past was cemented. Music also lost its position as a basic component of general education. From then on, classical music was on a path away from contemporary relevance, and the reproduction of music of the past became more important. In my opinion, the only way to ‘rescue’ art music from its relatively marginal status today, and to make contemporary composers as relevant as pop musicians, is to reinstate music as an important pillar of universal education. 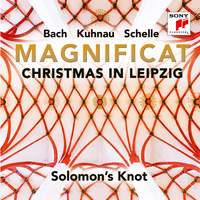