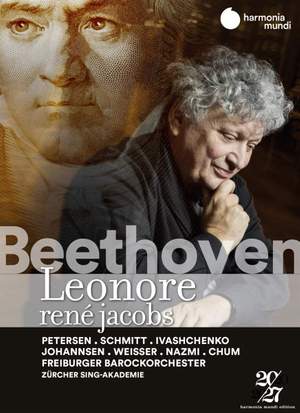 Of the principals only Johannes Weisser’s Don Pizarro disappoints, and even he is strong in the dialogue. Jacobs’s tempos are fast – sometimes a bit skittishly so – and the sublimity one looks... — BBC Music Magazine, February 2020, 4 out of 5 stars More…

Recording of the Week,  Beethoven's Leonore from René Jacobs and the Freiburger Barockorchester

The original 1805 version of Beethoven's only opera is a high-adrenaline experience in the hands of the Belgian conductor and his period-instrument band, with Marlis Petersen in the title-role and Maximilian Schmitt as her imprisoned husband.

From Leonore (1805) to Fidelio (1814) there were three successive versions of Beethoven’s opera, only the last of which has been in the repertory since the 19th Century.

Going against tradition, René Jacobs has chosen to revive the earliest version, reworking the librettos and the spoken dialogue: a genuine tour de force, this still unknown Leonore forms an incomparable musical and dramatic structure requiring exemplary mastery on the part of both orchestra and singers. This landmark recording proves its case in every respect.

Of the principals only Johannes Weisser’s Don Pizarro disappoints, and even he is strong in the dialogue. Jacobs’s tempos are fast – sometimes a bit skittishly so – and the sublimity one looks for is missing; yet overall this is an exciting account that offers a fresh look at an edition widely perceived to have been superseded by the composer himself.

Jacobs writes a passionate note in the CD booklet championing 1805 as the best version of the opera. He then backs it up with a swift, dramatic musical performance. As in the past, the result often sounds like a young Klemperer with original instruments, never afraid to let wind, brass or drums speak their parts out as contributors to Beethoven’s dramatic timbre. It makes for a performance well prepared and cast with the lighter (but always agile) voices that Jacobs tends to favour.

There is no question that Jacobs has here translated his academic argument into fervent advocacy...He is aided by a superlative performance from the Freiburger Barockorchester: the string playing, by turn lightly pointed or fiery, is complemented by characterful wind…[Petersen] gives a poised, exquisitely shaped and tonally beautiful account of the role...An early contender, the set bodes well to be one of the Beethoven year’s enduring highlights.

Period-instrument accounts of the opera in any of its incarnations are surprisingly rare; what a joy, then, to hear the rasping natural horns and dry timpani of the Freiburger Barockorchester conjuring Florestan’s dungeon into eerie life...Jacobs hurtles through the score at breakneck speed so that the adrenaline-level never drops and the action unfolds like a pacey thriller. For the most part it works brilliantly in service of the drama and characterisation, though I did long for just a little breathing-space in the Prisoners' Chorus.

As Jacobs and his singers present it, this is Beethoven’s opera as a descendant of the 18th-century Singspiel tradition, especially that of Mozart’s Entführung and Zauberflöte...His tempi are generally on the fast side, though the superb, crisp playing of the period-instrument Freiburg Baroque Orchestra ensures they never seem too hectic.