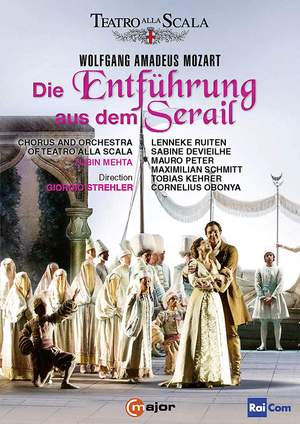 The unforgettable 'masterful use of light and silhouettes'(Milano Post) with which Giorgio Strehler interpreted the charm of Mozarts Singspiel was conceived for the Salzburg Festival, where it was staged in 1965 under the baton of then 29 year old Zubin Mehta, and then regularly revived at La Scala from 1972 onwards. At twenty years since the death of the great director, who from 1951 staged some by-now legendary operas at La Scala, Teatro alla Scala proposed anew this celebrated staging and called to the podium the man who conducted it the first time Zubin Mehta. 'Extraordinary, a wonder ' (Corriere Della Sera). The stage set with magnificent palace architecture and a sea view at centre is a veritable feast for the eyes, which is equally true for the elaborately and lovingly designed costumes. The viewer feels like hes being transported into the oriental aura. The fact that the current performance is conducted by Maestro Zubin Mehta, now over 80 years old, builds a bridge to Strehlers Salzburg production, which dates back more than half a century, and at the same time provides a touching detail of this timelessly monumental performance.

Strehler/Testi handles the balance between the comic and the serious astutely…Ruiten’s superb performance – touchingly acted, fluently sung – makes you both believe and care…Devieilhe soars effortlessly into the musical stratosphere…You might not associate Mehta, or indeed La Scala, with Mozart, but the pacing – deliberate in the Act 2 finale as well as in ‘O wie ängstlich’ – seems just right, and the playing is splendid…This is a delight.

This widely admired production by one of the great producers of opera has been rescued from yesteryear by being refurbished and presented anew with its original, masterful conductor... and a first-class singing cast.

The show, even if representing the best of its time, has become a period piece...Revived after so many years, the humour of Strehler’s approach, taken as a whole, now seems broad and even obvious...Joined to facility and expressive power, [Ruiten's] vocal poise and extensive palette of colours make hers a rewarding performance...Devieilhe’s Blonde fields a strong and lively personality.