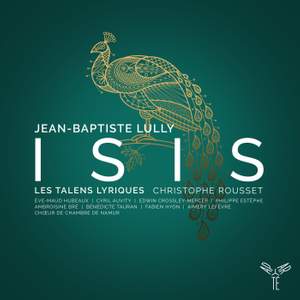 The French harpsichordist and conductor talks to Katherine about recording Lully's 1677 opera Isis (out now on Aparté) and the original 1859 version of Gounod's Faust, released in September on Bru Zane.

Christophe Rousset and his Talens Lyriques return to their first love with Lully and his seventh opera Isis.

Known as the musicians’ opera, inspired both by the Roman mythology and Ancient Egypt, Isis is mostly a story of love and jealousy: Jupiter courts the nymph Io and thus exposes his new love to the wrath of Juno, his godly wife, who will pursue her all over the underworld. This plot raised quite a scandal at the Royal Court when Madame de Montespan, who was the King’s favourite, saw in it a reference to her own situation, the Sun King being at that time occupied with his new mistress Mademoiselle de Ludres. She therefore exiled Quinault, Lully’s librettist, to punish him for his boldness.

The great intensity of Isis’ episodes, with all its metamorphosis and developments (Io becoming the goddess Isis) provides to Lully many occasions to shows his wonderful orchestral skills, revealing indeed a scenic vividness that left its mark: from the freezing chorus of the people of the frozen regions, that inspired Purcell for his Cold Song, to the grieving flutes imitating the nymph Syrinx turned into reeds.

Revived with great intention by Christophe Rousset, the Talens Lyriques, the Chamber Choir of Namur and a brilliant casting (the rich timbres of Ève-Maud Hubeaux and Bénédicte Tauran as Io and Juno, and Edwin Crossley-Mercer singing Jupiter), Isis displays its graceful aura and reveals all its charms in this wonderful recording.

The Namur Chamber Choir is full-bodied but the singers are marvellously light on their feet. The orchestra respond with brilliance and precision to Christophe Rousset’s direction. A word, too, in praise of an ear-tickling continuo group...This is a highly enjoyable addition to an excellent series of operas by a composer who, thanks to French groups such as Les Arts Florissants and Les Talens Lyriques, is at last coming into his own.

Rousset’s outstanding cast is a felicitous mix of such well-established favourites as the tenor Cyril Auvity, who brings his unrivalled experience to bear on three contrasted roles, and lesser-known artists such as the Swiss mezzo Ève-Maud Hubeaux…Little need be added about Rousset’s direction or the playing and singing of Les Talens Lyriques and the Namur Chamber Choir, all aspect of which carry the stamp of idiomatic authenticity characteristic of the conductor’s Lully projects.