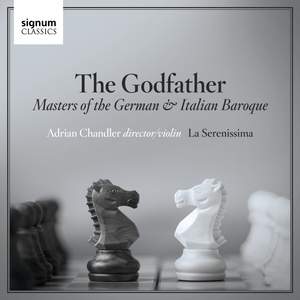 Masters of the German & Italian Baroque

If Chandler’s programming of oddities and fragments sometimes looks like a musicological download, the sound his orchestra makes soon makes you forget that. Bright, clear, open and gloriously... — Gramophone Magazine, February 2020 More…

Pisendel: Concerto movement for Violin, Strings & Continuo in A

Pisendel: Concerto for 2 Oboes and Bassoon in E flat major

Brescianello: Concerto for Violin, Bassoon, Strings & Continuo in B flat

Recording of the Week,  La Serenissima's The Godfather

La Serenissima explore the network of friendships and collaborations that helped bring together German and Italian styles during the Baroque, with concertos by Telemann, Pisendel, Brescianello and others.

The musical world of eighteenth-century Europe was a small one. Despite the problems presented by contemporary standards of transport, it was quite normal for composers in one part of Europe to be entirely au fait with what was happening elsewhere. This is borne out by the closeness of three German composers: Telemann, godfather to C.P.E. Bach; Pisendel; and J.S. Bach, who admired both his compatriots and composed some astoundingly difficult music for the violinist Pisendel. This programme celebrates their music as well as the music of those who contributed to their musical heritage. Included alongside the German triumvirate are works by Vivaldi who physically helped with the composition of Pisendel’s A minor concerto movement, Fasch who was a great friend of Pisendel and Telemann, and Brescianello, an Italian who helped the dissemination of Italian instrumental music throughout the German-speaking lands and whose concertos were played in Dresden by Pisendel.

If Chandler’s programming of oddities and fragments sometimes looks like a musicological download, the sound his orchestra makes soon makes you forget that. Bright, clear, open and gloriously brassy, with expansive but controlled windplaying, rat-a-tat drumming and boldly projected string sound led by Chandler’s wheeling and diving solo violin – all is light and energy. In places it is nothing short of magnificent.

Already Presto Classical’s disc of the week, riding high in the classical charts, and with a very favourable mention on BBC Radio 3’s Essential Classics, The Godfather is yet another hit from Adrian Chandler and La Serenissima.

One of the many things that La Serenissima always do very well is to take what might seem a dry concept – tracing the thread of musical connections between the various parts of Europe via pieces by the composers who helped to cement them – and make it fun...This enthusiasm can’t help but come through in their playing and the result is simply an offer you can’t refuse.