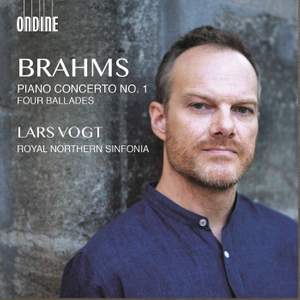 [Vogt] may well have conducted the orchestral tuttis, but everything sounds like large-scale chamber music…The pianist’s thinking behind this programme is evidently the way in which this music... — BBC Music Magazine, February 2020, 4 out of 5 stars (Performance) / 3 out of 5 stars (Recording) More…

The German pianist and conductor talks to Katherine about the joys and challenges of directing the two Brahms concertos from the keyboard on his recent recordings with Royal Northern Sinfonia on Ondine.

Lars Vogt continues his series of concerto recordings with the Royal Northern Sinfonia with this new recording of Johannes Brahms’ (1833–1897) First Piano Concerto together with Four Ballades (Op. 10) for solo piano. As in previous albums, Lars Vogt conducts from the keyboard. The evolution of Brahms’ 1st Piano Concerto took several steps. Originally conceived to become a Sonata for Two Pianos through orchestration it was developed into a four-movement Symphony until reaching into its final form of a Piano Concerto in three movements. During the process, which lasted from 1854 to 1856, some movements were also discarded and replaced by new material. This music is packed with much drama. No wonder since these years were particularly tumultuous in Brahms’ personal life: it was during this period when his great mentor Robert Schumann was sent into an asylum and ultimately died. It was also time when Brahms formed a close, lifelong friendship to Clara Schumann. Some of these feelings might well be echoed in the peaceful 2nd movement, Adagio. Brahms’ Four Ballades, Op. 10 are works written in 1854 by a young composer barely in his 20s, yet these pieces are technically mature and profound in such a manner that they could even be compared to his final piano opuses. Lars Vogt was appointed the first ever “Pianist in Residence” by the Berlin Philharmonic in 2003/04 and enjoys a high profile as a soloist and chamber musician. His debut solo recording on Ondine with Bach’s Goldberg Variations (ODE12732) was released in August 2015 and has been a major critical success. Lars Vogt started his tenure as Music Director of the Royal Northern Sinfonia in September 2015. Lars Vogt was nominated for Gramophone’s Artist of the Year award in 2017. His recordings of Beethoven’s Piano Concertos Nos. 2 & 4 (ODE13112) together with the Royal Northern Sinfonia and an album of Dvorak’s Piano Trios (ODE13162) received Gramophone’s Editor’s Choice in May 2018 and in December 2018. His most recent album on Ondine featuring four Mozart’s Piano Sonatas (ODE13182) was also chosen Gramophone’s Editor’s Choice in July 2019.

[Vogt] may well have conducted the orchestral tuttis, but everything sounds like large-scale chamber music…The pianist’s thinking behind this programme is evidently the way in which this music emerges from out of Beethoven’s shadow, and his superb traversal of the Ballades supports such a view.

The music-making is nothing short of sensational. This is a bold Brahms D minor with immense character, audacious and courageous. It is also perhaps the most sensitive and subtle reading of the score in recent memory...A wealth of seldom-heard orchestral detail emerges, with exquisite wind-playing especially prominent. Nothing is extraneous; every gesture seems bent towards maximum expressivity.

A triumphant vindication of Vogt’s courage in taking on the role of piano-conductor.

Vogt digs deep in the dark Four Ballades, and in the composer’s First Piano Concerto, in D minor, achieves a close rapport with his players.

The entire performance is remarkable