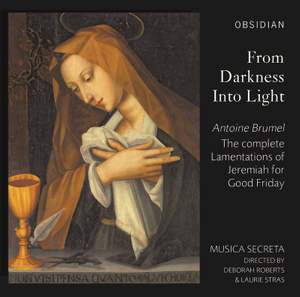 Antoine Brumel: From Darkness Into Light

The complete Lamentations of Jeremiah for Good Friday

This performance imagines them being sung in a 16th-century nunnery, so Brumel’s original low-voice scoring is transposed for female singers, with an organ and a viol providing lower parts. The... — BBC Music Magazine, February 2020, 3 out of 5 stars (Performance) / 4 out of 5 stars (Recording) More…

Musicologist and conductor Laurie Stras talks to David about her new album From Darkness into Light, which includes the first recording of Brumel's Lamentations - rediscovered by Stras after having been thought largely lost.

Based on a major new discovery, this recording features the complete setting of the Lamentations of Jeremiah for Good Friday by Antoine Brumel, one of the most celebrated composers of the Renaissance. Brumel’s Lamentations have been known, performed, and recorded for many years in a much abbreviated form of two verses and the refrain, “Jerusalem, convertere.” The additional seventeen verses, which were found hiding in plain sight in a sixteenth-century manuscript by Musica Secreta’s co-director Laurie Stras, reveal a monumental setting that is both intricate in its detail and imposing in its formal construction; a masterpiece brought from darkness into light. The second half of the disc focusses on gems by Josquin des Prez and Loyset Compere sitting alongside the anonymous beauty of works that decorated the nuns’ worship throughout the year.

This performance imagines them being sung in a 16th-century nunnery, so Brumel’s original low-voice scoring is transposed for female singers, with an organ and a viol providing lower parts. The resulting sound is radiant but it lacks the tenebrous quality that better reflects the plangent Passion Week text…The all-female vocal ensemble produces a delicate, unforced, vibrato-less sound.

The singing is charming and the final selection, a seven-minute anonymous Salve Regina in an alternatim setting, is ravishing. This well-filled program is of unusual interest.

Stras’s discovery almost doubles the length of the work and delightfully complicates its function...Musica Secreta begin rather carefully...The work, and indeed the performance, really begins to reveal its true richness at the first refrain, ‘Ierusalem convertere ad Dominum Deum tuum’...As so often with Musica Secreta, the meeting of inspired musicology with passionate and committed performance generates something way beyond the sum of its parts.