The history of early music is, inevitably, fraught with gaps and holes where pieces have been lost, entirely or in part. One work that was thought to have been reduced to a few fragments was the Lamentations setting by Antoine Brumel, one of the key composers of the Franco-Flemish school of polyphony.

Sometimes, though, we're lucky enough to get something back that had been thought lost forever. Recently, in arguably one of the most significant musicological finds since the turn of the century, researcher and musician Laurie Stras rediscovered the complete Lamentations in a manuscript connected with a Florentine convent. The music was hiding almost in plain sight, but had gone unnoticed by scholars up until now. The all-female Renaissance vocal ensemble that Stras leads, Musica Secreta, subsequently recorded the full work, and it's just been released on Obsidian Records.

I spoke to Dr Stras about the works contained within this astonishing discovery, and some of the complexities surrounding the role of women in Renaissance music-making.

The accompanying notes mention that this fascinating narrative of Lamentations readings was incompatible with liturgical use, but may have been part of quasi-secular Maundy Thursday celebrations that could also feature plays. Is there any hint that these Lamentations themselves might have been dramatised, perhaps forming part of the groundwork for the earliest operas?

There is no hint in the source, but certainly there are records of a boys’ company (not the Vangelista, but San Raffaelo) putting semi-dramatised “rappresentazioni” for feasts, including Maundy Thursday, in the later sixteenth century. Giulio Caccini took part in these. It might, though, be more accurate to see the Lamentations as part of the trajectory that became the sacred oratorio – less about costumes, scenery, and plot more about dramatic reflection.

The main common factor between the Lamentations and the convent motets comprising the other half of this recording is the copyist who created both manuscripts – is there any indication that the Lamentations themselves were intended for performance by female voices, or did you indulge in a little artistic license in using the same forces as the motets?

Ah, good question, and one that has been asked before! I wouldn’t call it indulgence or artistic license, no (that term might be reserved for any choir singing fifteenth/sixteenth-century liturgical repertoire with mixed voices…). Around a third of the works in the convent manuscript are in low clefs, which the nuns would have sung in transposition. If nuns were given access and opportunity to sing this music, they would have.

The first step in Musica Secreta’s Renaissance project necessarily had to be to show that female voices were heard in Renaissance polyphony, and my research into works composed specifically for or owned by nuns have given us the means to do that. The next step surely is to allow ourselves the same freedom assumed by male-voice ensembles (and the mixed-voice ensembles to which all our members belong or have belonged) and to choose the works we want to perform and record from a wider range than just those that I can categorically prove belonged to nuns. This doesn’t mean that we would sing anything and everything – the women of Ferrara (the concerto di dame and the nuns of San Vito) chose their repertoire carefully through rehearsing, adapting, and arranging, just as we do.

Many of the magnificent motets in that second manuscript, the Biffoli-Sostegni book, remain anonymous today. This seems incredible to a modern modern mindset; we live in a time where attributing authorship is a high priority. How do you think the names of these works’ composers managed to get discarded, forgotten, or lost?

I have a few theories about that. First – I don’t think that attribution was particularly important to many people. Other scholars have written about this compellingly, that the fixation on authorship grows out of commercial concerns (whose name is on the book?); elitism (there’s a great story in Castiglione’s The Courtier about the group suddenly changing its mind about the quality of a motet when they are told it’s by Josquin); and even the growing sense of the self as the artisan/merchant middle classes begin to grow in power. Second – if the composers of those pieces were nuns, they would have been less likely to claim authorship as part of their socialisation into the religious collective. The loss of self and the absence of identity was an important concept that could be embraced or imposed on individual nuns. Third – if these manuscripts are part of a reclamation effort after the 1557 flood (which is my best guess at the moment) then attributions might have been lost when existing copies were damaged. The Lamentations manuscript is also almost entirely unattributed (only the set by Thomas Crecquillon is labelled), and that cannot necessarily be explained by the first two theories here.

The take away, I guess, is that we cannot assume, looking at music from the Renaissance, that anonymity means the music isn’t worth recovering. My colleague Lisa Colton reminds me that anonymity is much more prevalent in what remains to us of medieval music, and audiences/scholars/musicians don’t really have a problem with that. Only when we get to a period in which authorship is a useful criterion for creating context for audiences does it seem to matter. I’d like to help audiences challenge that, but I want to do so by creating an alternative context for the music – cultural, historical, even personal – so that listeners don’t feel completely without an anchor for understanding what they are listening to.

Much of the early music that’s been recorded has featured male-only ensembles performing works for lower voices – works with a connection to monasteries and foundations connected with them. Is there a similarly extensive repertoire for female voices out there waiting to be rediscovered?

Yes, and no. Yes, it is entirely plausible that manuscripts for which there can be no secure provenance belonged to convents. It’s at least as plausible as them being owned by male institutions, and it’s only mindset that stops us going down that research/performance path. I would hazard that if the manuscripts also contain predominantly anonymous material they may not have received much attention, if any. But also, no, because there is considerable overlap in the repertoire that we know was owned/performed by single-sex ensembles. Verona 761, with its beautiful illuminated medallion of twelve nuns singing a polyphonic Kyrie – which decorates a Kyrie – contains a large proportion of repertoire that is also found in Sistine Chapel manuscripts. Loyset Compere’s Paranymphus salutat virginem, which appears in the Biffoli-Sostegni manuscript, is also in Anne Boleyn’s Music Book and in a number of cathedral manuscripts in Italy and the Czech Republic.

You make mention in passing of Leonora d’Este, a noblewoman, nun and composer. Female composers of the Renaissance era are very hard to find for a number of reasons, not least of which is an apparent tendency for their works to be published anonymously! Do you think they really were vanishingly rare at that time, or have they been buried by history in the intervening centuries?

I think that were probably many more women composers than we can identify now. The fundamental issue (then as now!) was access to musical education, and then access to an outlet for compositions to flourish. The convent was an obvious environment in which a female composer could flourish, if she had access to education – whether that was from another nun or from an external music teacher – but until the end of the sixteenth century, it was unlikely she would be able to put her name to her compositions and have them published. Secular women were less likely to have access to musical education, unless they were sufficiently wealthy (i.e. Leonora de’ Medici) or were part of a musical family (i.e. Francesca Caccini). But really, who knows? There may be many musical daughters of musical families in the ranks of the anonymous composers published in so many sixteenth-century prints. The point, as with sacred music, is that we can’t continue to rule out the possibility. 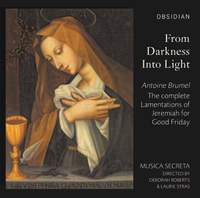 Antoine Brumel: From Darkness Into Light

"From Darkness Into Light" was released on Obsidian Records on 1st November.