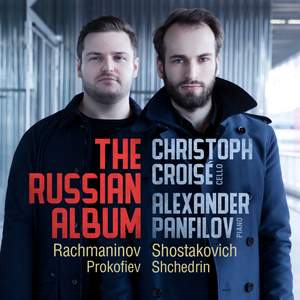 In Alexander Panfilov, cellist Christoph Croisé has a pianist who can match him for soulful, scrupulous introspection but who also guides the big outbursts and then turn to a darker cast of thought.... — BBC Music Magazine, February 2020, 4 out of 5 stars More…

Prokofiev: March (from The Love for Three Oranges)

The award-winning young cellist talks to Katherine about his second album on Avie, featuring sonatas by Rachmaninov and Shostakovich.

In the spring of 2019, Christoph Croisé scored a break-through with his critically acclaimed recording of Haydn’s Cello Concertos (AV 2402). With The Russian Album, he turns his attention to two towering 20th-century masterpieces, Sergei Rachmaninov’s early, eloquent and emotional Sonata for Cello and Piano, Op. 19, and Dmitri Shostakovich’s D minor Sonata for Cello and Piano, Op. 40.

The latter work’s finale featured what would become the composer’s signature style of caricature and irony that proved too provocative to the Stalinist regime.

Croisé also offers two “encores” - his own transcriptions of the March from Sergei Prokofiev’s propulsive opera The Love for Three Oranges, and Rodion Shchedrin’s flambouyant In the Style of Albéniz- and a bonus track by his compatriot, the Swiss cellist and composer Thomas Demenga, New York Honk, a humourous homage to the Big Apple’s cacophonous traffic noises.

In Alexander Panfilov, cellist Christoph Croisé has a pianist who can match him for soulful, scrupulous introspection but who also guides the big outbursts and then turn to a darker cast of thought. They’re in perfect balance…The Rachmaninov is more of a curate’s egg…Sound is full and vivid, though the pianist briefly overpowers the cellist in Rachmaninov’s second movement… The high jinks offered [in the shorter tracks] are delicious.