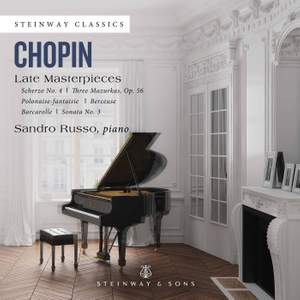 Delving into the world of Chopin during his later years, ""Chopin Late Masterpieces"" features some of his undisputed treasures from that period. While sorrowful to think in terms of late style in the case of a composer who left us when only in his 30s, Chopins final years were quite productive despite his worsening health. His late works indeed represented groundbreaking, innovative piano compositions and proved to be beacons onto future generations of composers, including Debussy, Ravel, and Scriabin, among others. Sandro Russos playing has often been referred to as a throwback to the grand tradition of elegant pianism and beautiful sound. Born in San Giovanni Gemini, Italy, Russo displayed exceptional musical talent from an early age and studied at the V. Bellini Conservatory as well as the Royal College of Music in London.