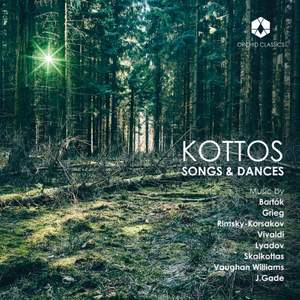 The performances are generally fine; one must single out Pernille Petersen’s recorder, which she can make sound like everything from a clarinet to a piccolo. She is sensationally virtuosic in... — Fanfare, March/April 2020 More…

The songs and dances of European folk music inspired the late 19th and early 20th-century composers featured on this album, from Bartók to Vaughan Williams, and the journey takes us from the mountain tunes of Europe’s northernmost tip to the melancholy songs of its easternmost reaches, to dances from its southernmost point.

KOTTOS takes its name from an enchanting, dangerous giant of Greek mythology. The instrumental makeup of the ensemble is unique: recorders from the lowest bass to the highest sopranino; a grand Russian Bayan concert accordion; the cello, which adds sounds from the avant-garde and Nordic folk music; and a Greek bouzouki adding Mediterranean colour and Celtic sonorities.

Besides creating and performing its own compositions, KOTTOS works with some of the most prominent Nordic composers of our time, some of whom have written works specifically for the ensemble’s unusual mix of instruments.

The group’s eponymous debut album KOTTOS, released in 2016, received the Listeners’ Prize of the Danish Broadcasting Corporation’s P2 station, for which it was nominated alongside recordings from the Berlin Philharmonic and National Danish Symphony Orchestra.

The performances are generally fine; one must single out Pernille Petersen’s recorder, which she can make sound like everything from a clarinet to a piccolo. She is sensationally virtuosic in the fastest music; I never knew a recorder could do that.

For sheer enjoyment, try the folk-classical group Kottos’s new release Songs & Dances...It’s all effortlessly musical, and somehow gets to the heart of everything in joyous fashion.