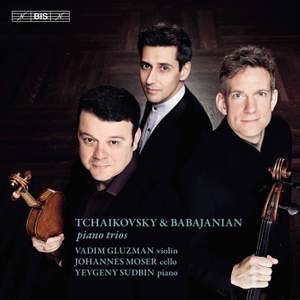 Tchaikovsky disliked the trio as a genre but choosing it for his memorial to Nikolay Rubinstein solved his need for a work of major heft yet intimate reflection. What I like about this beautifully... — Gramophone Magazine, January 2020 More…

Schnittke: Tango (from Life with an Idiot)

In Russian chamber music, a rather special tradition evolved around the piano trio, with a number of composers turning to the genre to write ‘instrumental requiems’. First out was Tchaikovskywith his Piano Trio in A minor, Op. 50, ‘à la mémoired’un grand artiste’, and he was followed by composers such as Rachmaninov, Arenskyand Shostakovich. In the case of Tchaikovsky’s trio, the ‘grand artiste’ was the pianist Nikolai Rubinstein, and Tchaikovsky chose the trio genre as he felt that a piece for solo piano would be too lightweight and one with orchestral accompaniment would be too showy. The work is in two movements, a Pezzoelegiaco(‘elegiac piece’) and a set of variations, and it begins with the cello playing a moving lament which sets the tone for the entire first movement. The theme returns at the end of the second movement in the form of an impassioned funeral march.

Seventy years later, when the Armenian composer and pianist Arno Babajanian(1921—83) wrote his Piano Trio in F sharp minor, he didn’t give it any subtitle, but there’s a grandeur and breadth of scale which rivals Tchaikovsky’s work –and the second movement is thoroughly elegiac in character. The trio is Babajanian’sbest-known work, composed in the Romantic style of Rachmaninov, but also rooted in Armenian folk music, melodically as well as rhythmically. Performing the two works are Vadim Gluzmanand Yevgeny Sudbin, both with Russian roots, joined by cellist Johannes Moser, and the three close the disc with Sudbin’sarrangement of a brief Tangoby Alfred Schnittke.

Tchaikovsky disliked the trio as a genre but choosing it for his memorial to Nikolay Rubinstein solved his need for a work of major heft yet intimate reflection. What I like about this beautifully (if slightly distantly) recorded newcomer is the way both elements are reconciled so convincingly...This newcomer is as competitive as any of its dozen rivals.

The playing is superb, Gluzman and Moser intoning the impassioned opening elegy [of the Tchaikovsky] with grave authority before Sudbin takes over with all his mercurial brilliance and the music takes flight...That same ferocious intelligence is brought to Arno Babajanian’s piano trio from 1952...Gluzman’s playing of the aching aria for violin that opens the second movement is just one moment to treasure in this outstanding recording.

This new performance is among the best...Amazing virtuosity but always at the service of the music.